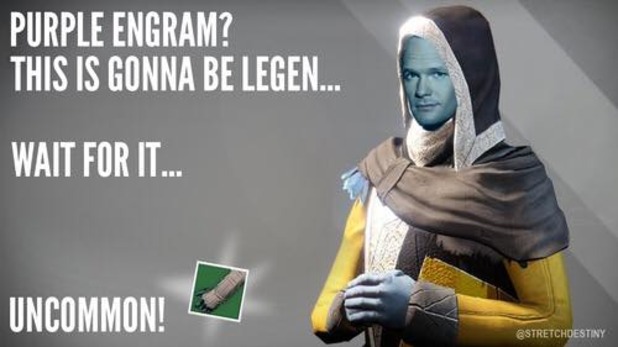 Hey, you have a purple there? Blue would look better on you!

It took a few weeks, but Bungie is finally getting around to addressing one of the major problems with Destiny — the first thing on the table is loot. Currently, the “Cryptarch” NPC deciphered unidentified items in an incredibly obtuse manner. The way the loot system is ranked is green, blue, purple, and orange, in ascending order.

If you have an unidentified item that was of a high rank (let’s say purple), there’s no guarantee that you’ll actually get that rank. In fact, the chance is actually pretty low. This understandably pissed a lot of people off, as some tried to find legendary items for hours, only to constantly get greens and blues.

In patch 1.0.2 next week, Bungie is fixing that. Now, purples will always be at least at a purple rank or higher — but it could still result in a purple rank material. Blues will also only produce blues or higher, and now, they have a better chance of getting you a purple. Daily and weekly heroic playlists will also net you more rare and legendary items, as well as the Vanguard: Tiger playlist.

These are all great changes that will allow people to actually get excited about loot and not dread a random number generator that often errs on the side of bad loot. I’ll also most definitely do more Tiger Playlist strikes to earn more materials instead of just farming items — this is a good thing. Currently, I’m right at level 28, and all I need to get to the max of 30 is more luck with raid gear dropping (I need two pieces). I’ve already completed the Vault of Glass and gotten my raid lockout for the week, so I have nothing left to do until next Tuesday rolls around.