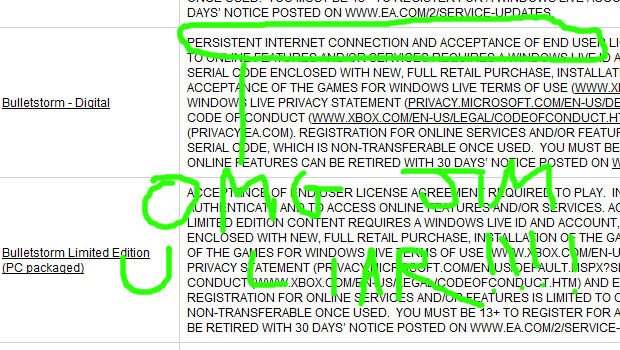 Fans of PC DRM have something to celebrate today, with news that Bulletstorm will demand a constant online connection in order to be played. More like Bullshitstorm, right guys?

It seems Electronic Arts is going to “pull an Ubisoft” while “protecting” People Can Fly’s ludicrous shooter from common thieves. The news comes from EA’s own product disclosure page, where it states, “PERSISTENT INTERNET CONNECTION AND ACCEPTANCE OF END USER LICENSE AGREEMENT REQUIRED TO PLAY.”

You’ll also be thrilled to know that the game (which already snubbed the PC by not releasing a demo outside of consoles) demands use of Games For Windows Live, better known as the worst thing to happen to PC gamers since carpal tunnel syndrome.

PC gaming. You have to love it.

[Update: People Can Fly has denied this. Apparently somebody at EA screwed up somewhere and wrote down the wrong DRM on the company’s product disclosure page. People Can Fly is looking into the mix-up. The official line is that the ‘net is only required for initial registration.

Also, nobody has yet denied the mandatory Games For Windows Live chicanery.]