BioWare’s made no secret of the fact that they keep a running tab of player metrics, and Dragon Age: Origins was no different.

They learned a few neat tidbits — “more people played warriors than rogues or mages” explains lead designer Mike Laidlaw — but they also learned something that changed their approach to Dragon Age II.

“We saw a lot of people disengaging at hour one, hour two. Not pursuing it, right?” explains Laidlaw. The Dragon Age team might have chalked some of those lost players up to rentals, but the statistics didn’t back it up: a significant number of people simply stopped playing Dragon Age: Origins after a few hours.

“I think what it really spoke to is something RPGs have been wrestling with for a long time: that first impression,” says Laidlaw.

So they fixed it.

“You get to an RPG and fire it up, and … it hits you in the face with a thousand stats. Those stats are very cool, but you may not be mentally or emotionally prepared to deal with them as your first thing to do in the game,” he says.

To keep people from checking out early, Laidlaw’s team totally reinvigorated Dragon Age II‘s intro. The result is so seamless and subtle that players might not even realize they’re being taught to play the game. Sure, there are some button prompts here or there, but the way Dragon Age II introduces its combat and narrative are remarkably elegant. 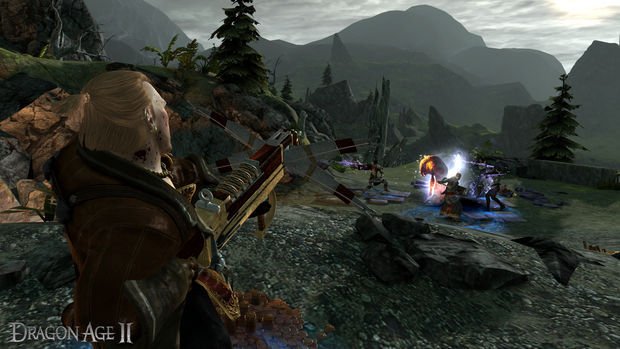 The game opens with with a cinematic. Varric, a dwarf, is being interrogated by Cassandra, a templar, the mage-police of Dragon Age. She is inquiring (rather rudely) after the whereabouts and identity of “the Champion.” Varric grudgingly acquiesces and begins an account of the life of Hawke, the Champion of Kirkwall.

Varric’s retelling of Hawke’s rise to power is the overall narrative structure, and his perspective is crucial in this introductory phase. “Part of the glorious advantage of the frame narrative is [that] Varric kind of lies about you. We establish how people perceive the Champion. This figure is of some import to the world.” Since most people believe the Champion to be incredibly powerful, she is, at least for a while.

Hawke’s story begins as she and her family try to escape the destruction of Lothering by the Darkspawn horde. As the flee their burning home, they become surrounded by Darkspawn: the game gives a few quick prompts about how to use the basic skills of the class the player has chosen and the slaughter begins. The enemies are plentiful, Hawke cannot die, and the colorful and vibrant art give players a visual excuse to experiment liberally.

After a short spurt of brutality, the game introduces slightly more powerful and slightly more complex abilities, and the violence begins anew. This process repeats itself a few more times before, without realizing it, Hawke has become impossibly powerful. This gives players a chance to learn the ins and outs of combat — and with Hawke’s infinite health and gentle guidance from the game, players can learn at their own pace. Thankfully, there’s an abundance of willing Darkspawn.

When Hawke rips an ogre apart with her bare hands and summons a dragon, Cassandra, quite literally, calls bullshit.

“We give the player a chance to just bust out for a minute. Here you go … go nuts,” explains Laidlaw. He’s clearly excited by the prospect and pantomines Hawke as a mage: “Cone of Cold, Fireball, rain fire down on your foes. That’s cool, that’s the mage experience in terms of combat.”

This perception of the Champion is so pervasive that most people aren’t even sure what she looks like — players won’t customize their Hawke’s appearance until after the intro, when Varric cuts out the mythologizing and sticks to the facts. No need to mess with dozens of facial sliders until players have already had fun with the game.

At this point, Varric begins his story in earnest. Assuming you’re now comfortable with basic combat, Dragon Age II dials back the theatrics but starts introducing complexity — Hawke has access to her basic starting abilities, but she and her companions start accruing experience points, gold, and inventory. 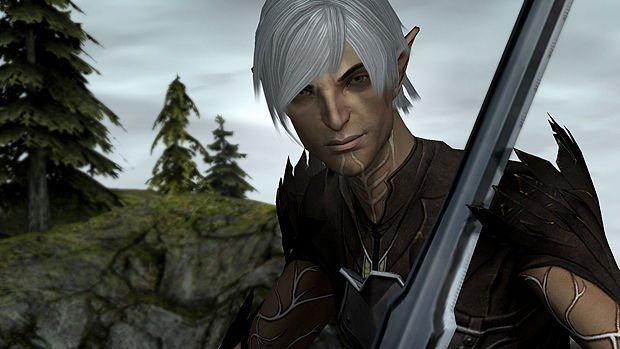 “You don’t need to go to the tactics screen first, you don’t need to pick how much dex you have first. It’s part of the organic learning process,” says Laidlaw. Tactics and statistics — so the logic goes — only make sense after a player has an in-game analogue for them.

It’s only after you’ve leveled up once that you start gaining new abilities and distributing stats, which dovetails nicely with Dragon Age II‘s new user interface — each stat comes with a description of the properties it governs and damage is automatically calculated based on stat distribution and equipment, making it easy for users to see exactly how their choices affect the game.

“So I think what that’ll do is help us and help players keep engaged a little smoother without us having to say, ‘Oh well, let’s get rid of stats!'” Laidlaw continues. “We didn’t want to do that; we wanted to present them in a better way.”

BioWare’s stat-tracking tools presented them with a problem, but Dragon Age II‘s cohesion of user interface, narrative structure, and tutorial solved it.