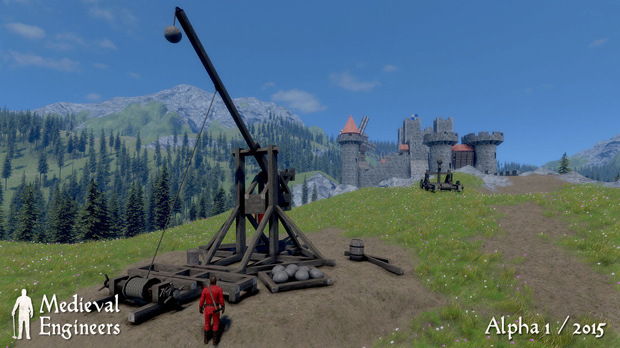 Keen Software has built a million-person-strong audience for Space Engineers, but I’ve stayed away from the work-in-progress construction sandbox game so far. Steam Early Access often has that effect on me. The studio’s next project, Medieval Engineers, will tap into the same desire to build and break cool stuff, but in a setting that seems quaint by comparison. Quaint can be good.

Inspired by real-world medieval technology, the game “strives to follow the laws of physics and history and doesn’t use any technologies that were not available in the 5th to 15th centuries.”

Players can build cities, castles, and mechanical devices — and, what’s this? — “perform landscaping and underground mining,” too. Don’t underestimate the importance of curb appeal.

“We didn’t want to only keep creating space games,” says founder and CEO Marek Rosa. “Instead we wanted to have a game where players can interact with life and nature. By creating a second engineering game, we are also leveraging our existing technology and experience.”

When Medieval Engineers arrives on Steam Early Access, it’ll launch with Creative Mode and an early prototype of Survival Mode. Like Space Engineers, I think I’ll wait until this is fully cooked.