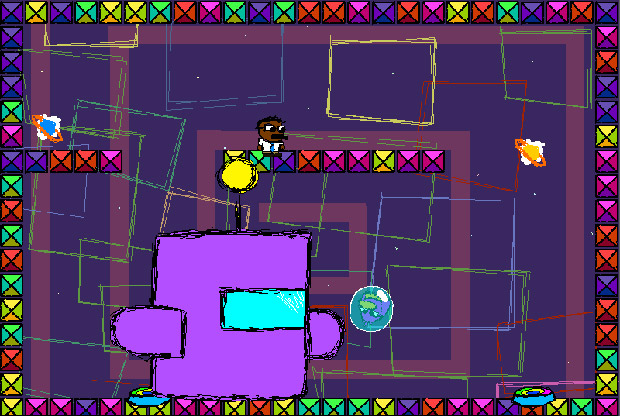 The new game from RunMan: Race Around the World co-creator Tom Sennett is an arcade-style platformer called Deepak Fights Robots. You need to give it a look, simple as that. Assuming you have access to a PC (Windows or Linux) or a Mac.

In addition to being a talented game designer, he knows a thing or two about making awesome, eye-melting websites and is more skilled with MS Paint than I’ll ever dream to be. Deepak Fights Robots is his first venture into paid-indie-game territory; I hope it’s a success.

I’ve played through the game already, so let me give you the highlights.

Deepak Fights Robots is, in my opinion, best described as Bollywood’s psychedelics-induced take on Bubble Bobble. What it lacks in pure dancing delight is made up many times over by the inclusion of tigers, groovin’ sitar jams, and one seriously manly Indian mustache.

The game is broken up into quite a few short levels, with the common goal always revolving around you grabbing shiny collectibles. (I’m not entirely sure what they’re supposed to be.) Something about a robot pimp locking you in the Cave of Robots, so sure, why not? Who cares what they are.

Get ’em all without bumping into any enemies, and you’ll go into invincible-superhero mode. You then complete the stage by blasting all of the enemy robots in the most heroic of fashions. Quick, fair, and fun — like I said, this is an arcade-y game.

Dying merely restarts the level, instantly; I’ll add that I never once felt frustrated upon totally blowing it. There are also items to collect for points — there’s a big ol’ leaderboard at the end of the game — and you can also pick up animal pals like the aforementioned tiger to give you an extra hit’s worth of life.

The music is amazing. It’s by Family Funktion and the Sitar Jams. The soundtrack meshes perfectly with the equally bizarre and charming visuals — it pushes you to keep playing just one more level. As per usual, Sennett’s art doesn’t play particularly well in screenshots, but it’s always a treat to see in motion. Think Yoshi’s Island as recreated in MS Paint on a tight budget.

Deepak Fights Robots isn’t terribly long, and $9.95 (even with free lifetime updates) can be a lot to ask of some of the more frugal readers in attendance, but it is fun throughout. That’s more than I can say for most games lately, independent or otherwise. I’ll take quality over quantity any day.

Also, there are cows that inexplicably wear glasses. Love it.