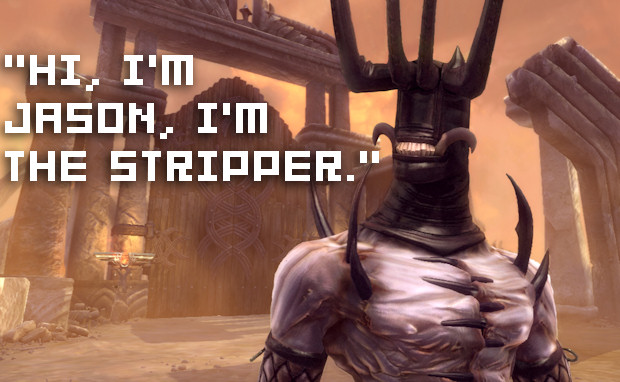 Like most sane people, I’m eagerly anticipating Double Fine’s Brütal Legend, and will gladly take any excuse I can to talk about it. Luckily, publisher Electronic Arts has decided to pander to our whims, releasing a new batch of screenshots and a few slices of artwork for we rudderless guppies to gawp at and fawn over.

I am absolutely digging the art direction of this game, especially the eyeless, massive-toothed enemies that I’m sure are inspired by some album cover that I can’t quite put my finger on. They look terrific, as do the environments.

We’ve also included a new fact sheet, because we know how much you chaps love facts. It details the game’s story, and also talks about online multiplayer and the plethora of rock stars that will be making guest appearances. Hit the jump for that, and let us know if you are, indeed, quite ready to rock.

From the mind of Tim Schafer and Double Fine Productions comes Brütal Legend , a 3rd person Action game rich in combat, imagery and storytelling that delivers lighter-flicking fun sure to melt your face clean off.

Brütal Legend tells the tale Eddie Riggs, the ultimate roadie. The “roadie’s roadie”, Eddie is the 1st person anyone calls when they need guitars tuned or stages rigged. With a love for hot rods and a photographic memory for every Heavy Metal album cover, and the lyrics those albums contained, committed to memory, Eddie has always felt out of place, like he should have been born earlier, when the music was real.

One night a stage accident knocks Eddie unconscious. With his blood dripping into the belt buckle he wears, a gift from his father, his blood quenches an ancient thirst that sucks him into a world that looks very strange yet oddly familiar, a world where every Heavy Metal album cover and lyric Eddie knows has come to life, a world where the evil emperor Doviculus and his demon army, The Tainted Coil, have enslaved the last remaining humans.

Led by Lars Halford alongside his sister Lita and the mysterious Ophelia, the human resistance is far from helpless. However, what they lack is someone to bring them all together; someone who can organize them and lead them into battle, what they need is a roadie. Under Eddie’s command, this barbaric force of hot-rods, Marshall stacks, leather, and chrome will bring this ancient world into the age of Metal.• Action Combat! – Brütal Legend’s core gameplay is classic Action. From close quarter blows delivered by The Separator, Eddie’s blood soaked broad axe, to ranged combat from your demon-slaying guitar named Clementine, as well as vehicular attacks supplied by your hot rod, The Deuce (aka The Druid Plow), Brütal Legend delivers deep, rewarding, fun combat that will have you throwing your “devil horns” in the air.