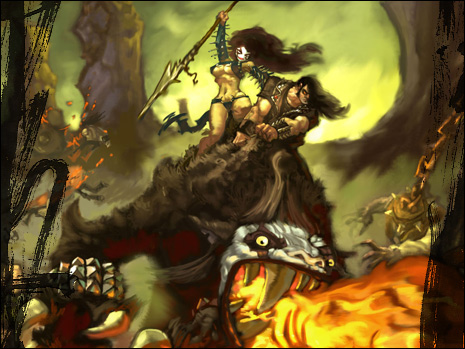 In a recent interview between MTV’s Multiplayer blog and Tim Schafer of Doublefine Studios, it was revealed that the aforementioned developers would not be presenting Brütal Legend at next week’s E3. The decision was reportedly prompted by today’s shareholder approval of the Activision/Blizzard merger.

It’s mildly disappointing that we won’t be hearing any new information on Brütal Legend, but E3 hasn’t really been about the fans for a long time. What makes this tidbit all the more interesting is the latter half of the statement, in which Schafer reveals the lack of a brutal presence at E3: “We’re not going to be showing at E3, but soon after that we hope.”

Hmm, what other large gaming event occurs shortly after E3? I vaguely remember something about pennies or something. Granted, this is all rampant speculation on my part, but if Doublefine decided to show off Brütal Legend at PAX rather than E3, then they know on which side their bread is buttered. What better way to debut your game than at a convention actually held for gamers rather than an exclusive media event?