Dogs and trolls and sheep — oh my!

I caught wind of Brothers – A Tale of Two Sons by way of a short teaser trailer a while back (you can find it after the jump) and was digging the art style, but put it out of mind. As its spring release approaches, however, it seems to be picking up steam. After GDC, Mikael Nermark, CEO and President of Starbreeze Studios, and Josef Fares, the Swedish film director helming Brothers, paid us a visit to show off the pleasant-looking game .

The story is minimal and noninvasive. The two brothers, each of whom is controlled by one of the analog sticks, are on a quest. There’s no co-op. Navigating both brothers at the same time is part of the gameplay — there is a learning curve to it, but it works surprisingly smoothly. What really stands out about Brothers is its tranquilly unfolding atmosphere, abetted by warm art direction and great sound work.

Fares told me that he hopes players take in the pithy, 3-4 hour game in one sitting and without considerable difficulty or challenge, emphasizing the experience over mechanical learning and good reflexes. The game, which might look like it would include some platforming, even automatically handles jumping for you. The control scheme is as pared down as possible. One analog moves one brother, the other analog moves the other. The left and right triggers act as your primary means of operation in the world in whichever ways are contextually appropriate.

In the beginning sequence, for instance, you navigate the duo through a small village. You’re free to make a beeline for your destination and do nothing, or you can faff about and interact with the environment and the NPCs. Doing the latter tends to reveal different things about the different brothers, as each has unique interactions with the various NPCs. One might have an unintelligible conversation (in the game’s nonsense language), the other might cause mischief — say, throw a bucket of water on an unsuspecting gentleman. 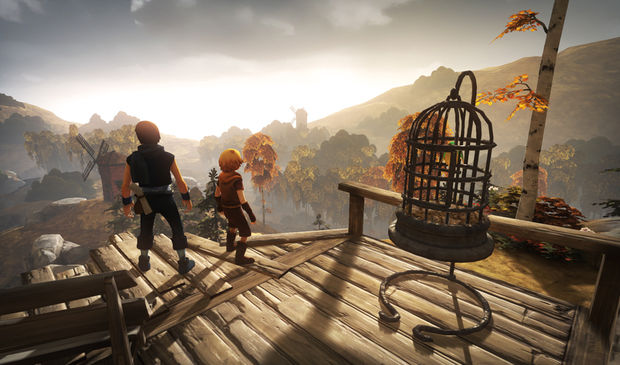 In addition, there are some semi “hidden” interactions to seek out, many of which are tied to trophies and achievements. At one point you stumble upon a group of rabbits. The black rabbits collectively run from the lone white rabbit. Interacting with the white rabbit using the older brother does little, but the younger brother will dump the white rabbit in some coal, giving it a black coat, at which point it will freely join the others. You can also be a huge jerk and throw some little girl’s ball down a well.

This is all done at a rather languid pace, though, and never too taxing. It’s hard to even call the present mechanics “puzzles,” given that the one and only solution boils down to “take either of the characters and press their respective button of interaction with the environment somehow.” Yet, while Brothers is ostensibly more about exploring and experiencing the world and its story than traditional “gameplay,” there was something somewhat pleasant about the pared down controls.

The one button mechanic proved oddly soothing, as instances of having to alternatively push them almost felt akin to some sort of deep breathing exercise, as your singular focus is on the holding and releasing of these two triggers. There is possibly even something cleanly metaphorical about holding on and letting go as it relates to the story of this family, but I’m getting ahead of myself. Steam players will be afforded keyboard use, but “it’s really not how it’s supposed to be played,” Fares noted. I also can’t see it being any good that way anyway. 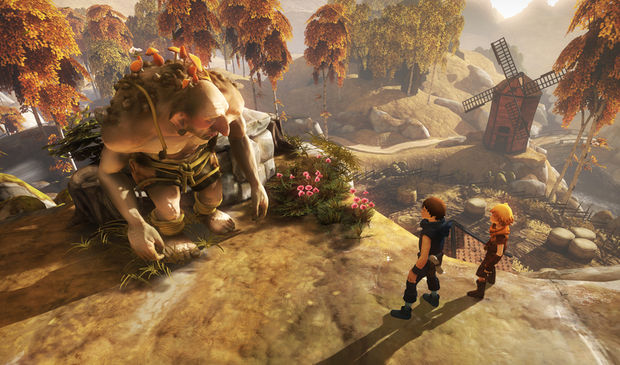 The concept behind this, beyond a drive toward simplicity, Fares explains, is that he didn’t want to pad the game out. All the animations and encounters are unique, one off happenings. At one point, the pair navigates mines by alternatively riding machinery and clearing paths. At another, the two are faced with a snarling dog and leap between points of safety while the other distracts the dog. None of these simple encounters that could act as traditional mechanics are repeated. They’re just interesting things that happen and you progress.

Despite the warmth and levity apparent in early screens and the portions of the game I was shown, I’m told the game gets darker as you progress, as fantasies are apt to do, particularly those of European lineage. Brothers draws influence from The Brothers Lionheart, a fantasy novel by Astrid Lindgren, Swedish author famous for Pippi Longstocking, among others. The music, too, carries a haunting, windy, Scandinavian influence.

Brothers – A Tale of Two Sons is looking good and quite pretty. Part of me feels its aspirations are loftier than what it is, but it has me rather interested regardless. At the least, it should offer several hours of relaxing, explorative fantasy.