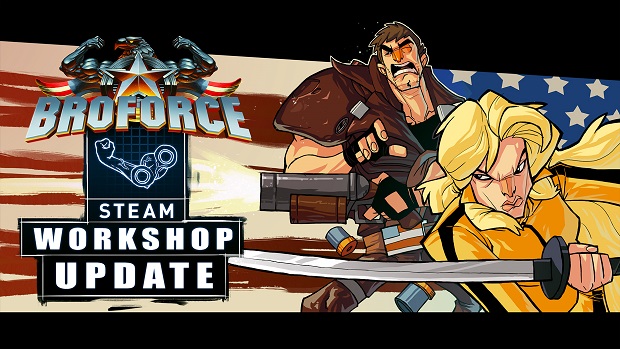 Guardians of the Constitution, Devolver Digital and Cape Town-based counter-terrorism unit Free Lives have recently released the hefty Bro-ctober Update for their napalm-drenched beacon of freedom and democracy, Broforce.

Steam Workshop support and an updated level editor have also been added. Players are now at liberty to share user-generated levels and update previously published levels on Workshop, because Freedom.

Online has also seen some much-needed tweaks and improvement by adding an updated lobby for finding and joining games, as well as replacing the previous networking backend with Steam P2P API for better player connectivity. Another welcome feature implemented with this update is the ability to invite patriotic Steam Friends to join your game.

Lastly, in an effort to make certain that no continent is left behind, new campaign missions set in Eastern Europe have been added to the the game, ensuring that our European counterparts are able to share in the sweet, sweet nectar of democracy that can only truly be provided by superior firepower.

For more detailed intelligence on the Bro-ctober update, or if you’d like to enlist, make sure to pay a visit to the game’s star-spangled headquarters on Steam.