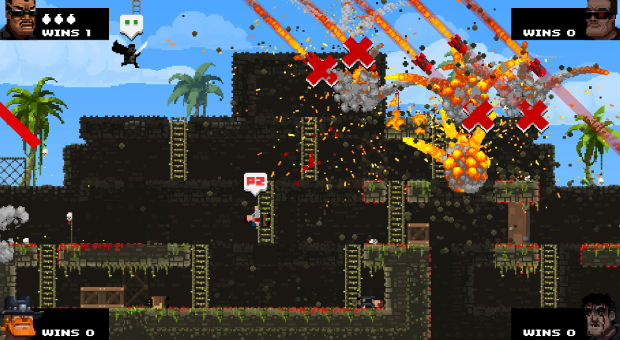 Real bros have bald eagle tattoos and rock mutton chops. They also respect women and play Broforce, the manliest side-scroller to ever bro this side of bro. Free Lives Games’ love letter to classic ’80s action movies is launching on Steam Early Access this Monday, April 7. Time for a bit of the old ultraviolence, my brothers.

Broforce follows roided-out heroes across destructible environments and through hyperviolent massacres in the name of keeping ‘Murrica safe. You’ll fight for the right to shoot stuff in the face by shooting stuff in the face, and it will be oh, so sweet. What’s more, you get to do all this with characters based on familiar ’80s action heroes like RoboCop, Die Hard’s John McClane, Judge Dredd, and even Alien’s Ripley. Consider my jimmies sufficiently rustled.

Previously, Broforce was available during its free alpha stage after having begun life as an entry in the April 2012 Ludum Dare. Thankfully, the self-described patriotism simulator took on a life of its own and will be ready for launch this summer for PC and consoles. It should be a real feel-good hit of the summer, if you know what I mean.