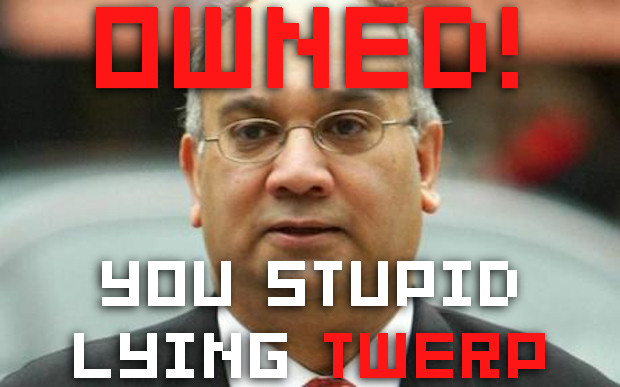 Yesterday we reported on British MP and reputed liar Keith Vaz, who pursued his long-running agenda against videogames by complaining about Modern Warfare 2‘s controversial airport scene and promising to bring the issue up in parliament. Today, Vaz was righteously pummeled by fellow Labour MP Tom Watson, who said politicians should be encouraging, not attacking, the videogame industry.

“It carries a content warning, it is an 18 plus game,” Watson told MPs after Vaz claimed he was trying to protect children. “It would be better for members of this house to support the many thousands of games designers and coders and the many millions of games users, rather than collaborating with the Daily Mail to create moral panic over the use of video games.”

Junior culture minister Siôn Simon also supported the game, stating that adult-rated games deserve to be released and marketed to adults: “The game you refer to is a certificate 18 game. It should not be sold to children and the government’s job is to make sure that adults … can get what adults should be able to and children are not in danger of being subjected to adult content.”

Tom Watson has set up a Facebook Page for gamers who are sick of anti-videogame news, with the message, “Are you sick of UK newspapers and (my fellow) politicians beating up on gaming? So am I. The truth is, UK gamers need their own pressure group. I want to help you start one up.”

So there you go. Nice to know that not every politician is an out-of-touch bastard, and it’s nice to see that corrupt liar Keith Vaz getting the smackdown he deserves.