Splash Damage’s upcoming first-person shooter, Brink, does away with the traditional videogame dichotomy between solo and multiplayer modes. “We’re used to there being a real difference between single-player, and co-op, and multiplayer,” noted Edward Stern, the game’s lead writer, at a recent demo in New York.

“I think we’ve all had the experience of being good at the single-player version of a game, and [then] you go online, and it’s just terrible — totally different — and it’s, like, ‘Hang on, I was good at this! Now I don’t even know how bad I am.’ The whole point of Brink is to make it a completely seamless experience,” he explained. Brink doesn’t have distinct menu listings for single-player, co-op, and multiplayer; instead, it includes separate campaigns for the two forces, Security and Resistance, and you can play through them however you like. 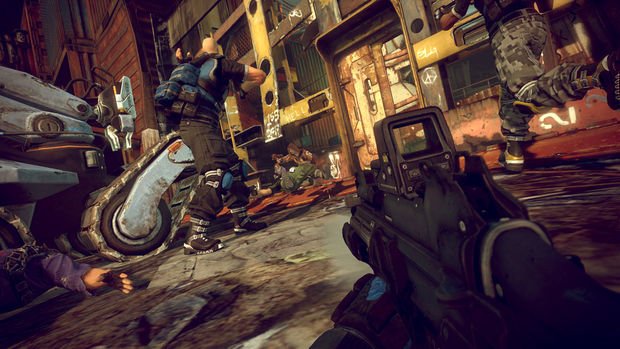 Splash Damage has designed Brink so that the core experience remains basically identical, no matter how you’re playing the game. Every mission is an 8-on-8 match, so there’s no gameplay distinction between single-player, co-op, and multiplayer. You can complete both campaigns alone; the game will provide seven AI teammates and eight AI opponents. If you want to play with some friends — essentially, co-op against the CPU — that’s totally doable. And you can also hop into an online game with up to fifteen other human players, if that’s your bag.

If that prospect boggles your mind, Stern gave an example of how things could play out:

Let’s say you are playing what you think of as a totally multiplayer game: it’s online against human opponents — everyone, on your side and the other [is human]. One of those players — either on your team or on the opposing team — could be playing through it in a single-player storyline. It just so happens that they are playing that chapter of their story online against human opponents (and we give them extra XP for doing that).

In my experience, Brink’s bots were entirely competent; they didn’t wait around for human players to complete objectives or push the front ahead. In fact, I went off exploring Container City during part of my demo, and the rest of my team pressed on without me. I returned to them five minutes later, coming upon a heated battle between my Security forces and the enemy Resistance in an open area. 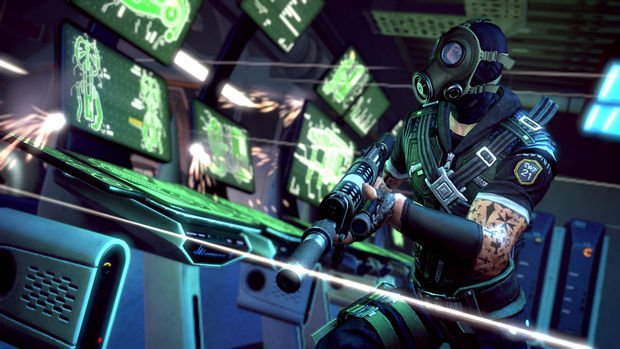 This concept sounds inherently exciting, but as far as I’m concerned, its most important facet is that it eliminates the single-player/multiplayer disconnect that Stern spoke of, where you can breeze through a shooter’s single-player campaign but remain utterly inept when it comes to online multiplayer action. Brink is the same game either way: as Stern put it, “Once you get good at the game, that’s it; you don’t need to learn any new laws or behaviors when you go online.”