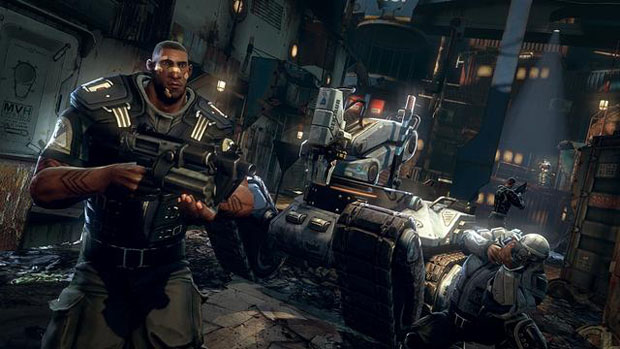 Nick and I got to see some of Bethesda and Splash Damage’s Brink, scheduled to release in 2010 on Xbox 360, PS3, and PC, up and running. It looks great so far. We had a chance to chat with Paul Wedgwood, CEO of Splash Damage and Game Director on Brink, and Richard Ham, Creative Director, on what we were seeing. And out of our chat came some interesting details on the look of Brink.

If you’ve seen footage and noticed some visual similarities to other notable games, then you’re onto something. We were told that the designer of Sheppard from Mass Effect, Tim Appleby, headed up Brink‘s character designs. An art director from Prince of Persia and Rainbow 6: Vegas is also on staff. And the Killzone 2 resemblance? Turns out it shares a level designer with Brink. The combination makes for a somewhat familiar yet still unique looking game. It’s definitely a different world from any you’ve been in, but you can point out certain things that may remind you of other games. The characters, though? They’re pretty distinctive. You’ll see what I mean.

In our interview we also find out a bit about Brink‘s back story as well as how you can play the game in whatever way you like. Open-ended missions, experience points, multiplayer — there’s still a lot to be uncovered here. We’re looking forward to hearing more.