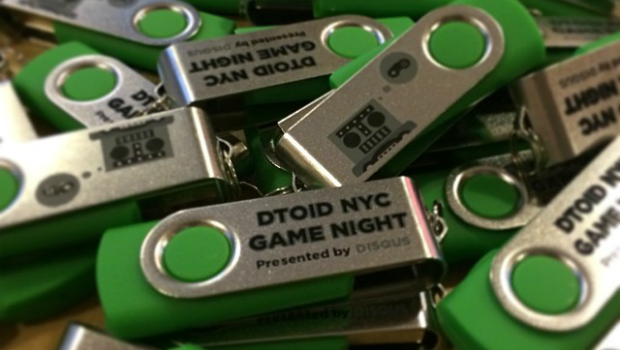 A little over a month ago, Destructoid collaborated with Disqus (the people behind our comment system) to bring you Dtoid NYC Game Night, a meetup of Dtoid staff, community, and game developers from in and around New York. And as history has proven time and again, you fine folks are just as fun in real life as you are online!

Over 125 Dtoiders and staff showed up for the fun, including Jonathan Holmes and Conrad Zimmerman. Holmes even won the Street Fighter II tournament! Amongst the chaos, eight awesome indie developers were on-hand to showcase their wares, and two of them (Simple Machines and Holy Wow Studios) even debuted their newest creations exclusively for the Dtoid audience! (Check out the full recap here!)

All in all, it was a roaring success, and I’m incredibly jealous I couldn’t attend. (Though I am rocking a new custom Dtoid Game Night USB drive. Now who’s jealous?) Were you able to make it to the meetup? Let us know in the comments! Interested in seeing a similar event in your town? Make your presence known!