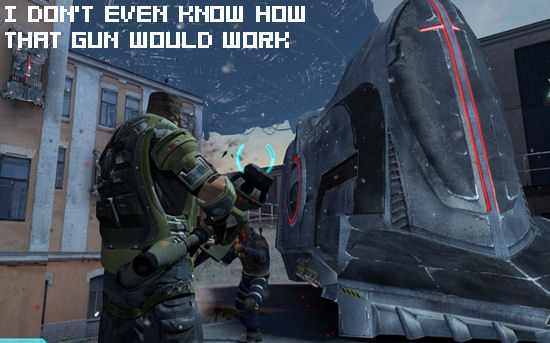 To be fair, the main character can also be seen walking around a bit and holding his gun at a different angle, but upon first glance, Salvation looks like little more your regular third person shooter. Delving deeper however, the game’s story — that of rebellion against a future ruled by a staged and sinisterly orchestrated religion — is enticing, and the promise of almost 20 bosses, some solid action and literary influences such as Orwell’s 1984 hold a lot of promise.

“The protagonists of the game are people from various climes with different past, but common and terrifying present. They are bound together with the idea of overthrowing the Regime and destroying the Hell and Paradise virtual systems. They will have to overcome many obstacles on their way to the truth, hidden from people by the New World Government.

Throughout 14 missions grouped into 7 episodes, the player will take up roles of Narumi Amano, – a genetically modified assassin, Sergei Thor – the captain of east European resistance cell and Alexander Geist – a rather cynical psy-powered smuggler with his own motives to hate the Regime. The game is planned for release in Q2 of 2009 on PC and Xbox360.”

When I saw the first screens, I expected another attempt at a “gritty” sci-fi shooter that may or may not be fun and was prepared to casually sit on it. As I write this, however, I can feel my saliva glands anticipating what could be a most notable addition to the action genre. For all the cynicism, I still love a typical shooter (screw yo’ innovation), but if they decide to be a bit more intellectual than that, I’m certainly not going to object.

Time, as they say, will tell, and I shall be looking into this one as time goes on.