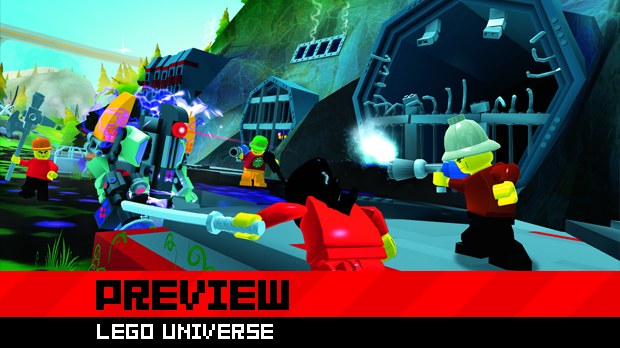 It is good professional practice that when you first meet a developer to exchange business cards, then follow up with a friendly handshake. However, during one recent gaming opportunity, checking out an MMO coming late next year, we went to exchange business cards. Oddly, instead of a card I received a couple of plastic LEGO Mini-figs with contact information printed across the chest.

It’s a good thing I was checking out LEGO Universe, otherwise that would be just plain weird. Besides the impractical nature of the Mini-figs (I mean, seriously, how am I to get that in my wallet), it was act that exemplifies the very nature of a LEGO game: fun.

Now LEGO Universe is a complex entity. Like all family oriented MMOs, there are some special challenges that developer NetDevil is going to have to deal with. Thankfully, it looks like they are on track for making a fun and very interesting MMO for all ages, one that you will understand after the jump.

I can say LEGO Universe might be the most casual friendly MMO I have ever seen. There are no classes or tech trees, rather, players will be able to collect rarer and rarer weapons as they level up. A good weapon, other than having high stats, will also offer a spell or defensive maneuver. This is the only place you will see secondary attacks outside of basic weapon attacks. It’s very simple, but it creates a neat platformer/action adventure feel that is somewhat refreshing for an MMO. Instead of worrying about many different stats and groups and instances, you just worry about smashing stuff with friends and collecting loot.

Fans of Telltale’s previous LEGO games will find a lot to look forward to in this game. There is plenty of platforming and block breaking of LEGO-built creations. Even the “quick-build” feature has been brought back into the game. This is where you’ll have the chance to quickly build a predetermined platform or object to help you progress.

However, new is something called a “spark”. This is the internal essence of your Mini-fig, and it is also one of a few resources you need to worry about. Every time you do a “quick build,” or create an object, or whatever, you’ll use up this spark energy. This is how NetDevil deals with level tiers. Sometimes you just cannot plainly go to a new area because you haven’t unlocked enough spark slots to perform all the necessary “quick-builds”.

Many of these problems can be dealt with by working with friends. As an MMO, you’ll be able to do group quests, sure, and many of the boss characters you fight will be easier with more people. However, it really doesn’t look like NetDevil is really trying to make a game that forces these 4-man groups to work together. I suspect that if you lone-wolf it, you can beat those bosses later, you’ll just have to level grind to gain more spark slots, as well as health. PvP battles, it should be mentioned, is not something The LEGO Group and NetDevil wants to touch.

The ultimate feeling I get from the game, and which Creative Director Ryan Seabury pointed out, is that the game is almost like an MMO Zelda. Consider that you have hearts for health, and that resources (spark units, LEGO bricks and pre-fab parts for building, as well as money) pop out of boxes and enemies, as well as simple puzzles, this is a pretty accurate descriptor.

Adding to this is the questing nature of the game, as you are constantly on the move to go from one area to another, dealing with evil robots, pirates, whoever. Along the way, you’ll be asked to help do things like repair a road. Once this is accomplished, you’ll have unlocked a racing mini game that will offer you more stuff to do. There are plenty of these minigame areas, continuing the Zelda feel described above.

Also, since this is a LEGO game, expect plenty of customization. Your LEGO mini-fig will have plenty of customizable options right from the get-go, as well as unlockable content as you play. While some of these clothing and design options affect stats to your mini-fig, much of it is purely aesthetic changes. Besides changing your character, there is actually a pet system within LEGO Universe. As you play across themed areas, you’ll come across themed LEGO animals that will challenge you to fulfill requirements. Make sure their wants are satisfied, and you’ll gain those pet parts. Unlike other pet systems in MMOs, these pets are completely customizable, so you can take different elements of your animals to create a delightful monstrosity, like an Ele-gator-saur, for example.

But more than customizing your characters and pets, you’ll also be challenged time to time to create in-game objects, like rocket ships, vehicles, and random elements, like bats. At this time you’ll enter a special zone (activated by literally putting on an imagination hat), that will let you create these in-game objects that others can see while not being bothered by other players. Thankfully, while LEGO and NetDevil have added partially developed parts, you’ll be able to break these down even more to gain more bricks. It’s actually a fairly developed process, creating objects, and while I’m really impressed with everything, I can suspect that people might be overwhelmed in this portion of the game.

That creativity doesn’t even end there. If you are so inclined, you’ll have the opportunity to own your own themed areas that you get to entirely deck out. I was shown a pirate-themed area where player created boats and houses were placed about, and I was shown the creation process for making a dragon that actually moves. It really cool, just very involved, and some people are surely going to dig it.

Initially, when the game launches late 2010, content is going to be limited to the LEGO IP. That means LEGO Indiana Jones, Star Wars, Harry Potter, and all those crossovers are not going to exist in this game, at least initially. Seabury was clear that they are completely open to those crossovers coming to LEGO Universe, but it is something to not expect for a while. Thankfully, the current plot based upon an evil Maelstrom infecting the LEGO Universe is more than enough plot for a game based on LEGOs.

Graphically LEGO Universe is something I’m really impressed with. Sure, NetDevil lucked out creating a game based off of simple plastic bricks, but in general, this game is incredibly nice to look at. Check out the screenshots. While staged, they are completely taken with the in-game engine, and are actually fairly impressive. While I was not told the system requirements, let it be known that the servers are actually handling some of the processing. Apparently, and I’m not lying, LEGO bricks with their pegs and slots are actually very difficult to render in real time. Who knew?

Considering this is a family oriented MMO, expect there to be certain restrictions on communication. While the developers used free-chat like in any typical MMO, I was told that content, including user created LEGO content, will be moderated, and that there will be a tiered system of communication. Smart parents will be able to limit the method of communication their children can take part in, however this system is still be worked upon. Same goes with account information. NetDevil is really working hard to remind kids to be safe.

What I’m most excited about is the fact that nearly everything that can be created in-game can be created in real life, due to LEGO’s Design byME service. While they wouldn’t confirm that your customized mini-fig or personal creations will be linked to that service initially, the proof was in the pudding. Sitting before me was a table of exact recreations of the in-game player-created rocket ships, pets, and vehicles. Hell, even the personalized “business cards” sitting in my pocket shows that The LEGO Group has some plans in store for bringing the in-game to real life. Very very cool.

I don’t want to geek out, but I have to say that LEGO Universe is a very exciting game to look forward to. While some might shove it off as a children’s game, it offers a lot more than I initially expected. It’s very streamlined in areas where it needs to be (adventuring, basic attacking), and complex where it should be (building stuff). Fans of LEGOs should really get a kick out of this game, and anyone who just wants a fun platformer set in an MMO world should really pay attention. Even more, the fact that they are looking into a console release is also very exciting.