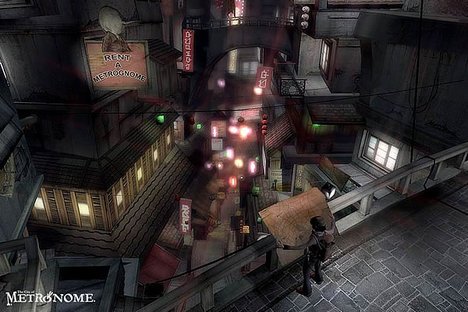 If you were excited about Tarsier Studios’ City of Metronome, now might be a good time to get over it.

In a recent interview with PlayStation Universe, Tarsier game designer, Björn Sunesson, states that the game as you might have known it no longer exists. The project, he goes on to say, has been put out of production for nearly a year. Why? Metronome, which used a unique visual style and game design approach that heavily relied on sound, was viewed as too risky by publishers.

“A new team combined with a game that had unproven “weird” ideas for gameplay and took place in an environment unlike any other game. So what we are doing now is basically building the needed track record, combined with re-designing gameplay to a state where it is still innovative and awesome, but not so unusual that publishers marketing people gets all confused and scared.”

Tarsier are still actively working on projects, so we’re likely to see some interesting products emerge in the future, but it seems the City of Metronome project is dead.

But don’t worry — Madden NFL 2008 is shipping on time, there’s another Pokémon game hitting shelves in a few months, and at least one Ghost Recon game will probably be announced later this year. Who needs unique and interesting IPs? The industry is doing just fine without ’em.