Classic games like Arkanoid and Breakout are always a blast to play. I think one of my first “mobile games” was one of their clones, before smartphones were the phenomenon they are today, of course. I’ve just always had a soft spot for the pure and satisfying gameplay that these titles offer. Plus, one of the best feelings ever is when your ball gets stuck behind a wall of blocks and wreaks absolute havoc with no effort on your part whatsoever.

This gameplay concept has also spawned some brilliant spinoffs, like the eardrum-assuaging BIT.TRIP.BEAT or the pixel-perfect Wizorb. While 2x0ng is only tangentially related to Breakout clones, its integration of that satisfying bouncing ball into a procedurally-generated roguelike adventure with a bit of Commander Keen-esque puzzle solving is what propels the game into indie perfection.

Note: My screenshots may look different from your game because I’m playing using colorblind mode. To enable colorblind mode, press the “[” key on your keyboard while playing. This feature was added to the game by the developer after getting feedback from me and another colorblindie who just really wanted to play his game better. What a guy!

2x0ng is a mish-mash of a roguelike, a puzzle game, and Breakout. The objective of each level is to find and enable the exit using the various colored blocks. The only game mechanic is throwing your pixel-orb out in the direction you are facing. This will damage enemies, absorb the color of colored blocks, or destroy walls of the same color, depending on what the pixel comes in contact with. For example, in order to remove a blue wall surrounding the exit, you must first throw your pixel at a blue-colored block to change the pixel’s color, and then toss it at the exit’s wall. 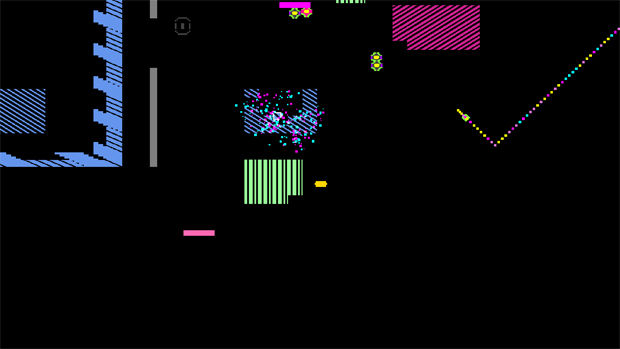 Things get more complicated rather quickly, as colored blocks themselves become walled off and more enemies begin to appear. One thing I absolutely love about 2x0ng is its assortment of enemies. Just like the proverbial “good ol’ days,” you will have no idea how new enemies act until you observe them. It also helps that the enemy designs are rather abstract, thanks to the game’s simple yet evocative art.

“What the hell is that thing? What’s it shooting at me? Can I even kill it?” These are frequent questions that will run through your mind, some of which may never be answered because you’re probably already dead after sitting there and asking all those questions.

The game retains that feeling of your Breakout ball doing all the work as you throw your pixel at a group of enemies, only to then watch it ricochet back and forth as you laugh manically out loud to no one in particular. It’s just so flippin’ satisfying to hear the old-timey sound effects as you watch these, uhh, whatever they are, crumble under the power of your boomerang pixel.

As with any roguelike-ish-esque game, death comes swiftly and frequently in 2x0ng. Dying results in starting the entire run over, so be careful! This game gets incredibly difficult, so prepare yourself for a challenge if you want to play anything past level eight or so. Adaptation is key in 2x0ng, as every level is procedurally generated. The idea of escaping any given level seems really easy, until about five enemies spawn and that weird guy who shoots stuff at you is conveniently right next to the exit. Seriously, what’s he doing there?

Anyway, 2x0ng has a great meaty mechanic sandwiched between superb aesthetics and procedurally-generated levels, which combined creates one of the most deliciously replayable treats ever. 2x0ng is a perfect example of what “indie games” really can be. An outwardly simple idea executed to perfection and released to the public for free. So download 2x0ng and enjoy yourself.