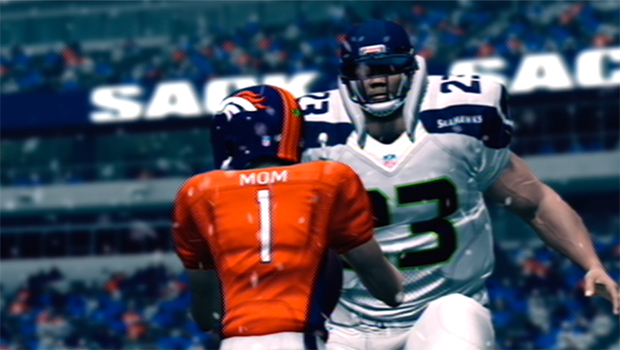 Some things were made to be broken

I haven’t sat down to willingly play a sports game since me and my brother found NHL Face Off ’98 on a demo disk during one VERY boring summer vacation. But every time I read one of Jon Bois’ amazing Breaking Madden articles I wonder if that’s a mistake. When I see Cam Newton relentlessly haunted by an unstoppable poltergeist his teammates seems to ignore, I have wonder if I’m missing out on something.

By taking a sledge hammer to the player’s stats and the rules of football, Bois is able to make wonderful poetry from Madden‘s base components. He extracts soulful expressions of beauty from one of the most crassly commercial series on the market.

Or, sometimes he just destroys the heart and soul of Denver Broncos for cruelty’s sake.

I’ve always believed the best kind of writing can make you care about anything, even if it’s about something you normally wouldn’t give a shit about. Considering I’ve managed to ignore two decades worth of Madden games, but look forward to Breaking Madden every week, I think that’s telling.