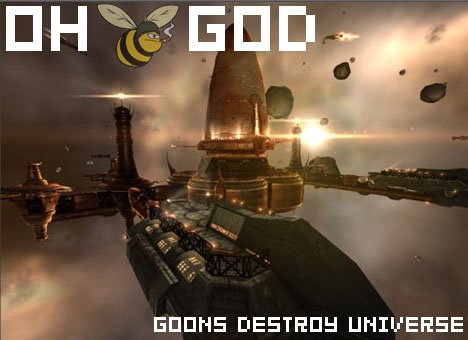 In the most balls-out act of deep space espionage in the 21st century, GoonSwarm, EVE Online’s in-game Something Awful forum contingent, has finally defeated their arch enemies, absolute rulers of the game universe, Band of Brothers. Thus ends a years-long David and Goliath dance that has made modern gaming history on multiple occasions. As this is a breaking story as of today’s wee hours, I’ll spare you my verbal flatulence and put my better-informed friend Bjorn Townsend on blast:

Literally, Band of Brothers is no more. They got a spy into the executor corp at director level, kicked out every corp, stole all the assets they could lay their hands on, and altered standings so that everyone will start shooting everyone else. And then they closed the alliance, and created a new corporation called Band of Brothers with the same corp ticker, so they can’t even have the old alliance name back.

Hit the jump for the big, beautiful story.

Said corp is of course joining GoonSwarm. When EVE goes down for nighty maintenance, BoB loses sovereignty over every system they have. They’re finished, unless CCP bails them out and rolls back the servers.

[As of the maintenance this morning,] CCP has yet to issue an official statement, but it appears that they are letting it stand. BoB [sovereignty (in-game clout)] dropped with downtime as expected – and CCP allowed an in-game news story to be published covering the story. If they intended to intervene they would have squashed the story until they could decide how to proceed.

Meanwhile, the Northern Coalition, GoonSwarm, and everybody else are racing south to participate in the biggest land grab in EVE history. No direct contradictions to the Goon story have emerged thus far, it appears that they really did do what they said they did. That’s a before/after map of the BoB regions, showing the sov changes.

Word on the street is that the NC is going to wipe BoB from Delve. Morsus Mihi is pretty fired up from when BoB invaded them over the last few months, and they were already aligned with the Goons against BoB. So I think it’s likely that BoB’s former assets, corps and allies will be put to the sword in short order.

You can buy game time cards with real money, and trade those for ISK. The exchange rate is around 10 million ISK to the dollar. It’s hard to say exactly how much was stolen with any sort of authority. We know [GoonSwarm] stole at least 30 billion isk in capital ships (from the screenshot Mittani released) plus another 13-15 billion in liquid isk, plus an unknown number of ships and modules on top of that. That’s only what we know of for sure.

However, the greater cost will be in under-construction supercapital ships. You cannot build titans and motherships without sovereign space. When they lost sov, those jobs were put on hold until they can regain their sov. If they can’t regain it, they will lose those ships. We have no way of knowing how many ships were under construction, but if they lost even one Titan in this way… well, Titans have an estimated value of around $5,645 US. [source]

Gentlemen, I am floored. I want you to see this for what it is: not only is this an act of griefing on a truly epic scale, but we’re living in an age where the pew-pew noises of kids playing astronaut on the internet have far-reaching consequences.

Can you smell that? That sort of eau du ozone, rubber, and dust? That smell is the goddamn future, friends. We are, all of us, finally living in the world our grandfathers wrote pulp novels about. Enjoy the show.

there is no bob~~~ [EVE Online Forums] (first official Goon claim of victory, notable in that it begins “hello! i am a mitten, a mighty SPACE TYRANT~, i focus my space tyranny on the v. important job of being 1. warm 2. fuzzy”)

MP3 of a goon telling the whole story on Ventrilo

IRC log of BoB HQ during the fall [Kugutsumen]