During an acceptance speech at the Country Music Television awards earlier this week, Brad Paisley said some things. Some of those things were wrong, and we have proof.

The Grammy Award-winning country music star urged children interested in music to pick up real instruments, not to simply fall back on videogames approximations of the real thing.

“Rock Band never got anybody a date,” Paisley said. “Never.”

While we agree that being in a band may increase your chances with your partner of choice (we have seen VH1’s Rock of Love, afterall), we also had a strong feeling his statement was completely off the mark. Turns out we were right, and we’ll do him one better — Rock Band has resulted in no less than two engagements.

Earlier this year, Ryan Clementz “popped the question” to Laura Ramkissoon after performing Roy Orbison’s “You Got It” during a Rock Band night at New York City’s Village Pourhouse. Laura, a member of a top-ranking Rock Band leaderboard group, Die! In a Fire, accepted. The couple had originally met online playing — you guessed it — Rock Band.

Taking it a step further, Jeremy Harless of Coker, AL wanted to propose to his girlfriend Beth and asked Harmonix for a little help. The developer agreed to set up the proposal as an in-game Rock Band “Message of the Day,” a cool little dream-come-true for Jeremy and Beth, both huge fans of the Cambridge-based developers music title. 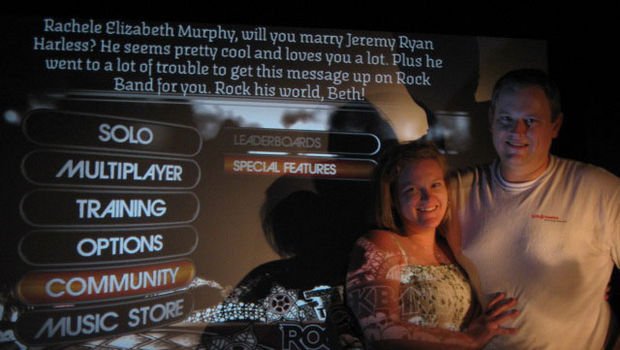 So yeah, we get it: Playing and mastering a real instrument is an immeasurably rewarding experience, something anyone with the desire to do so should take a shot at. We think the developer of Rock Band would agree, too — its staff is made up of skilled, working musicians.

But sorry, Brad Paisley, we need to respectfully say that your statement about Rock Band never getting anyone a date (never!) is outlandish and 100% mistaken. So to you we throw a hand up and say: “FACE!”

That’s right, we went there.

[Note: Paisley’s song, “Mud on the Tires,” is currently available on the Rock Band Music Store as downloadable content. It also appears as a track on the upcoming retail release of the Rock Band Country Track Pack, which hits stores on July 21.

At the time of writing, it’s unclear how many dates people will get from playing this song with plastic instruments.]