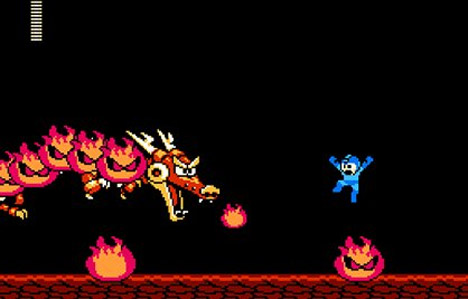 In the most unexpected and totally awesome-filled news of the day, GamesRadar has put up its hands-on with the WiiWare-bound Mega Man 9, and guess what — it’s going to be an 8-bit game!

Highlights from the article include: Splash Woman (the first ever female boss character), Dr. Light’s shop making an appearance, and the fact that some of Mega Man 9‘s music is taken straight out of Mega Man 2.

If you haven’t fainted from all of the excitement, make sure to check out GamesRadar’s interview with Keiji Inafune, where he doesn’t deny that an XBLA and PSN version of Mega Man 9 are being made.

I’d heard rumors that Mega Man 9 would be going back to its roots to make up for all of the less-than-stellar Mega Man games that have been released over the years, but I had no idea that it would end up looking like an NES game.

Are you guys as excited as I am?