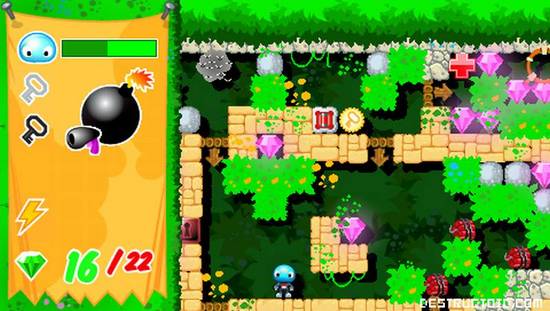 First Star Software have sent over some screens for their upcoming Boulder Dash Rocks!, a graphical makeover of their classic PC title. The game will be coming to the Nintendo DS this November, and the Sony PSP version will follow in the first quarter of 2008.

The arcade-puzzler (developed by the smelly sounding British studio, Tuna Technologies) follows the adventures of the game’s main character, Rockford as he attempts to collect diamonds and avoid perils which face him at every perilous turn. Rockford (not to be confused with 80s pop-singer, Rockwell of “Somebody’s Watching Me” fame) has a number of tools at his disposal such a bombs, laser guns (pew pew pew!), and more.

Each version of Boulder Dash Rocks! will contain a platform specific mode, never before available — so that means you’ll just have to buy them both, right?