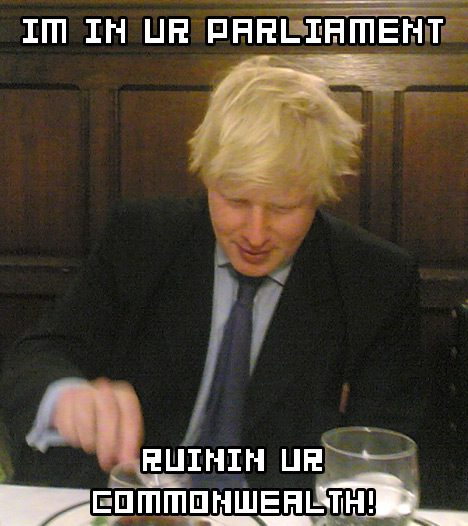 Boris Johnson is England’s answer to Ann Coulter. Sure, he lacks her breasts and ovaries filled with razor sharp needles, but he more than makes up for it with his ruddy countenance and utterly inane opinions. Plus, this albino waste of flesh somehow manged to get himself elected to Parliament!

Mr. Johnson recently posted a blog entry decrying the “narcotic” menace that is video gaming. Apparently England has solved all of their other pesky problems, like cancer and why Mike Skinner isn’t more famous in America, so now they are free to turn their attention to a subject that has been undermining their traditional grace and charm for years: video games.

Read this, then use a wetnap to soak up the blood spilling out of your ears:

It was among the first acts of the Labour Government to institute a universal “literacy” hour in primary schools; and yet, in the six years following 1997, the numbers of young children who said that they didn’t like reading rose from 23 per cent to 35 per cent. In spite of all our cash and effort, the surveys increasingly show that children (especially boys) regard reading as a chore, something that needs to be accomplished for the sake of passing tests, not as a joy in itself. It is a disaster, and I refuse to believe that these hypnotic little machines are innocent.

So Mr. Johnson would have us believe video games are a pox on society because little boys in England don’t like to read? That’s the dumbest statement to come out of England since Madonna moved over there and said, well, anything really.

NO CHILD ENJOYS READING! They would rather be outside, skinning their knees and huffing glue. Next Mr. Johnson will want to burn homosexuals on the grounds that little boys think little girls have “cooties”.

Hit the jump for more of our outrage and adorable pictures of kittens.

(We lied about the kittens. Sorry.)

They become like blinking lizards, motionless, absorbed, only the twitching of their hands showing they are still conscious. These machines teach them nothing. They stimulate no ratiocination, discovery or feat of memory — though some of them may cunningly pretend to be educational. I have just watched an 11-year-old play a game that looked fairly historical, on the packet. Your average guilt-ridden parent might assume that it taught the child something about the Vikings and medieval siege warfare.

Phooey! The red soldiers robotically slaughtered the white soldiers, and then they did it again, that was it. Everything was programmed, spoon-fed, immediate — and endlessly showering the player with undeserved praise, richly congratulating him for his bogus massacres.

It has been a while since I was pillaging the coasts of England with Eric The Red, so perhaps I’ve forgotten all about the tea cozy knitting contests and all those long nights that we would sit around and braid flowers into each other’s beards, but if I remember correctly, THE VIKINGS KILLED PEOPLE CONSTANTLY! That was kind of their thing. It would be like saying a game about ponies isn’t accurate because it only depicts them running around and making little girls squeal instead of ghostwriting for Tolstoy.

Mr. Johnson epitomizes the kind of grandstanding politician that has turned the US into an international laughing-stock. When he can’t raise ire through actual issues, he pins the blame for national problems on something common to everyone. By decrying something found as common as video games, he can garner the support that he would lose by focusing on such distant issues as the atrocities in Africa or England’s constant metaphorical fellating of America. After all, the fat housewife down the lane has no idea who Donald Rumsfeld is or why so many Muslim extremists hate him, but she sure knows where the Xbox is and she’ll be damned if she’s going to let that scourge corrupt her fat little urchins.