When Gearbox’s Randy Pitchford started spouting off that there were literally millions of guns in the developer’s upcoming title Borderlands, I didn’t have any reason not to believe him. I mean, why would he lie? He’d never get away with it; you know someone, somewhere is doing the math on that right now. Or they’ll count when the game comes out in October. I’m sure someone already has a spreadsheet going.

So when I got invited out to Gearbox’s Plano, Texas-based studio — a massive, multi-level compound that lives unexpectedly inside of a Bank of America building — we jumped at the chance to put this “millions of guns” thing to the test. After all, while I had no reason to not believe Pitchford’s claims of there being millions of guns in Borderlands it all seemed a bit… unbelievable.

After spending an hour or two with the Xbox 360 version of Borderlands in a four-player, system-link setting, I’m a believer. And all I kind of want to do is shoot some more stuff.

Before I got to the good stuff, Gearbox had me start at the game’s beginning, choosing from one of four characters (or classes), on a truck towards a place called “Firestone Depot.” Each of the four characters has his or her own unique skills. Choices range from a siren, Lilith — a master of deception and trickery whose preferred weapons are of the incendiary and shock variety – to the hunter, Mordecai, master with long-ranged weapons and revolvers.

I played it safe and went with the soldier, Roland, the character I was told could be considered the most rounded, ideal for beginners. My other option was the appropriately-named Brick, a massive jock-like character who likes to see things go boom or otherwise pound enemies with his ham-sized fists. Reminded me of a kid I went to college with, so I passed.

After character selection, I arrive in Firestone Depot, greeted by Claptrap, a talking-robot that looks like a filthy, low-rent version of Star Wars’ R2D2 that glides on one wheel. He hands me a device that triggers my heads-up display, and tells me to follow him before scurrying off. For whatever reason, I already have a gun in my hand, and wanting to know what it is, I check my inventory. 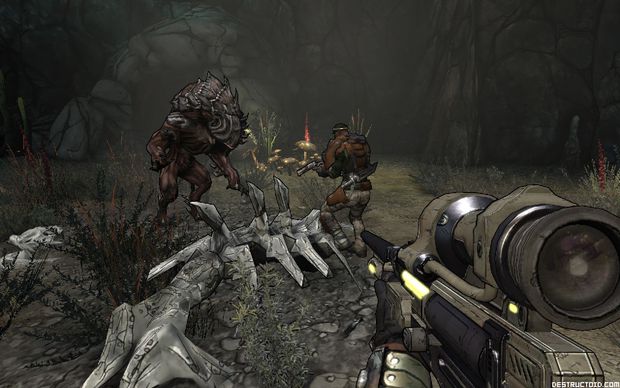 It’s a “CR20 Rusty Machine” gun, its damage “6” and its accuracy rated at around “81.” I have no idea what that means, and the gun isn’t the prettiest — its name has the word “rusty” in it after all — but I don’t mind too much. I pull the right trigger and my muzzle flashes, shooting up dust, making my controller vibrate. I need to find something to shoot with this thing, so I follow Claptrap, who at this point is freaking out, repeatedly yelling “I’m over here” in my general direction.

The next few minutes of gameplay has us finding a “New You” station, which allows us to change our names (it starts with the default names, as mentioned above) and a few colors of my outfit. I need to go all pink, because that’s how I roll — these scummy dessert thugs won’t know what hit them. Speaking of which, when do I get to shoot something again?

We continue to follow Claptrap into the “peaceful” town of Firestone proper, which as we soon come to find out, is not really peaceful at all. This is when I get to put this gun, one of a few million apparently, to the test. The town is filled with bandits, and me and my three partners make short work of them. It’s here I realize that Borderlands is, at its heart, a solid first-person shooter experience. Gearbox has puts its years of FPS developer to good use. The controls feel tight and my experience with console shooters has me feeling right at home — pull the left trigger to aim down the sights, pull the right to start killing things. 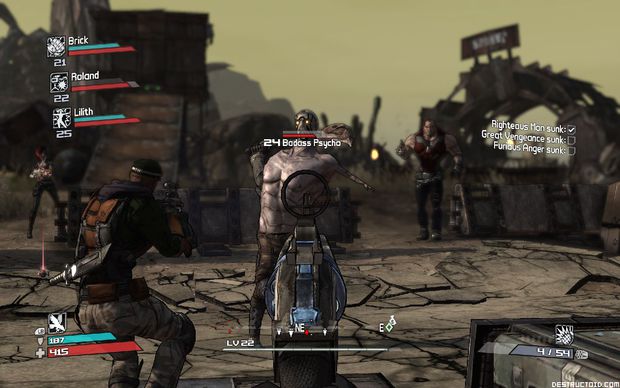 Here is also where the game’s role-playing game roots begin to peek through. Unlike in other shooters where bullets merely result in blood splatters and explosions, damage dealt in Borderlands is visible as numbers, and a damage bar above enemy heads. Killing enemies gives you experience, of which I’m positive will later result in me being able to wield more than one of the game’s millions of guns. Oh, and there’s plenty of blood splatters and explosions too… sometimes a combination of both. This pleases me.

We also come across our first box, which Claptrap advises us to open.

“The box is awaiting your attention,” he says. “Please open the box.”

He doesn’t have to twist my arm, so I do. There are a few guns and some ammo inside. The four of us swarm upon the box, repeatedly pressing “X” to pick up everything inside. I grab not one, but two new pistols — something called a “BLR Swatter” and an “RF Repeater.” The “Repeater” is automatically equipped, so I switch to it; despite the fact that it does more damage than the “Swatter,” it’s an unimpressive looking piece of equipment.

I swap it out for the “Swatter,” which is more intricate looking, and even has a scope attached. I pull back to aim down the sights which brings up the scope (complete with a cool-looking skull with wings!), and I fire off a few rounds. This makes me feel good about my manhood, and I’m immediately sold on it. Seriously, I need to go find more things to shoot.

So we do. We’re shooting bandits and dog-like creatures that crawl out of caves, all of them dropping ammo and money — sometimes even random guns — as they die. We’re scavengers, and we want it all, pressing and holding “X” to pick up everything around us. We accept a few missions — Borderland’s mission structure is relatively open, with a feel not dissimilar to some MMORPGs (go kill eight of these things, or find 12 of these things). About 20 minutes in, I’ve shot dozens of thugs and other strange creatures, picked up plenty of cash, leveled up a few times, and swapped out my guns multiple times. 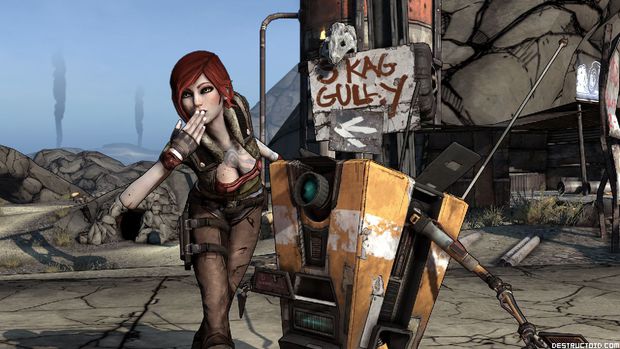 By this point, I’m beginning to start to believe Pitchford’s “millions of guns” claim, and I’m also starting to get a bit worried for my own well-being. You see, there’s a lot of loot in Borderlands. It’s everywhere — in boxes, in piles of waste you rummage through that’s scattered around the game’s wasteland… it even falls right out of enemies as they drop lifeless to the ground (these guys should consider fanny packs, maybe). So here’s the problem: It’s addicting, and with each gun I’m picking up being better than the last (with its own unique stats, look, and feel), I’m having a hard time knowing when this is going to stop.

“Okay,” I’d say to myself every time I found a new weapon, “I need to go shoot something with this thing… immediately.”

Before Gearbox pulled me off the units and sent me on my way, I had seen (maybe) 30 or 40 of the game’s “millions and millions of guns.” Broken up into unique classes (like shotguns or rifles, for instance), each had its own unique look and feel. At one point, I picked up a gun that fired incendiary rounds, with a random chance that my targets would burst into flames. Let me tell you: when that happens, it’s like experiencing an orgasm for the first time. I’m told some ammo has the ability to electrocute enemies. I want that, and I want to shoot something with it… right now.