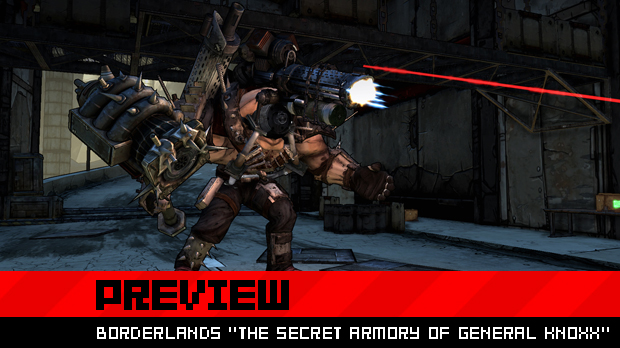 People, Gearbox loves you. The team behind Borderlands took fan feedback and criticism to heart, and the third DLC pack, “The Secret Armory of General Knoxx”, is more or less a love letter to its fans. There’s a stronger emphasis on story, the level cap has been raised, you’ll be exploring a completely new environment… there’s just so much new stuff here.

So much content is included in this DLC that “The Secret Armory of General Knoxx” could have easily been released as a standalone retail game for a higher price point. But like I said, Gearbox loves you and all this new content will be yours for just $10.

Get a taste of what’s to come in “The Secret Armory of General Knoxx” after the jump.

At the end of Borderlands, the Vault was opened, lots of people died and, more importantly, the Crimson Lance were nearly wiped off Pandora. “The Secret Armory of General Knoxx” is a continuation of the Borderlands story post-Vault, and it deals with a new Crimson Lance threat on Pandora.

The Crimson Lance wants the alien technology they cherish so much back, and they’re not about to just hand it over. They’re stockpiling weapons in a secret armory as they await a huge invasion force to arrive and take back the alien tech. You have a small window of opportunity to destroy the armory before the invasion force arrives, and you’ll be getting a lot of new tools to help you in your new quest.

As you may have already heard, the level cap has been raised to 61. New gear will be supplied to match the new cap and, of course, there’s new unique weaponry for you to get your hands on. There are plenty of new enemies for you to use all your new toys on, too.

There are between 20 to 30 new enemies you’ll be tangling with in “General Knox.” Some new Crimson Lancer units include the Pyro Lancers that attack with flamethowers; Devastators, which are big-ass mechs; and the Lance Rocketeers that fly around wearing jetpacks. There are new non-Lancer enemy types as well — just wait till you see a Midget riding a Skag like a pony.

The environment you’ll be playing in is also completely new. You begin your quest in a town called T-Bone Junction, which is located in a huge, ancient, dried-up lake known as the Parched Fathoms region. Before you can venture forth into the hostile world, though, you need to help Scooter build you a new vehicle.

Scooter is back in “General Knoxx,” as is Marcus. Moxxi is even around, and she plays a larger role in the overall story than she did in the DLC that wore her name. Along with old friends come new allies, one of whom is a former Crimson Lancer named Athena. She’s offered her assistance for whatever reason, and is a big help in the fight against the Crimson.

Near Scooter’s garage are parts you’ll need to complete your new ride, but this little fetch quest is interrupted. A pod, filled with Crimson Assassin’s wielding dual katanas, crashes into the town. Sent by the Crimson, these fast-moving killers are part of the Omegas — a group of highly trained, relentless bounty hunters — who are after your head.

After you’ve taken out the assassins, you’re able to grab the car parts and finish building your new vehicle. You then get to see Scooter digitize and upload the new vehicle into the Catch A Ride System, which lets you call in a vehicle anywhere on Pandora.

There’s a bigger emphasis on vehicles in “General Knoxx”; three new vehicles are part of this expansion. The first one you get is called the Monster, and it’s a six-wheeled beast good for off-roading. The Monster is a good all-around vehicle suited for two players — one steers, and the other uses the mounted missile launcher. The Racer is a remix of the Runner, and is designed to get you around quickly. Last but not least is the Lancer, the first vehicle designed for four players. One player drives, another shoots the cannon, another can drop mines, and the fourth position is a blast wave that goes out in all directions to push back any enemies that have gotten too close to the car.

There’s a lot of open space that you need to traverse between areas, and vehicles will make it easy for you to get around. There’s a highway system that takes you all over the region, but due to the resurgence of the Crimson Lancers, roadblocks are set up all across the highway. Since vehicles play a bigger role this time, new enemies were created to balance out the vehicle combat. One such enemy is the Lance Probe, a flying robot that doubles as a propaganda machine. As you’re getting attacked, the Probe tells you just how much better the world would be without you. Cute.

On top of all the new additions, Gearbox has made a lot of other improvements in General Knoxx. The storytelling is more upfront, rather than what comes across as an afterthought; it’s presented on a more moment-to-moment basis. Your allies are actually animated as opposed to the mannequin feel they had previously. There’s more detail to the environment than in the past, too, and you’ll notice that immediately when you look at the buildings in T-Bone Junction alone.

This is the same Borderlands you love, just packed with much more awesomeness. “General Knoxx” is double that of the “Zombie Island of Dr. Ned” DLC, and it’s obvious just how much Gearbox has pushed the Borderlands engine. You’re getting a ton of new content and with all of this for just ten bucks, you can’t go wrong.