All right, I may have messed up. When we called dibs last month, I was dazzled by the south Asian muscle woman Amara. And while I’m still going to put her poster up in my locker and draw hearts around it in pink permanent marker, I may have to go back and choose somebody else as the first Vault Hunter I take to dive into Pandora, Eden-6, Promethea, and wherever else Borderlands 3 takes me.

See, my favorite character to play as in Borderlands 2 was Salvador the Gunzerker, and after a short session playing as Moze the Gunner, I got a tinge of what it felt like to play Sal. Moze can’t stay in her Iron Bear mech indefinitely the way Salvador could keep Gunzerking forever, but when she’s in it, she feels like an unstoppable beast in the same way. 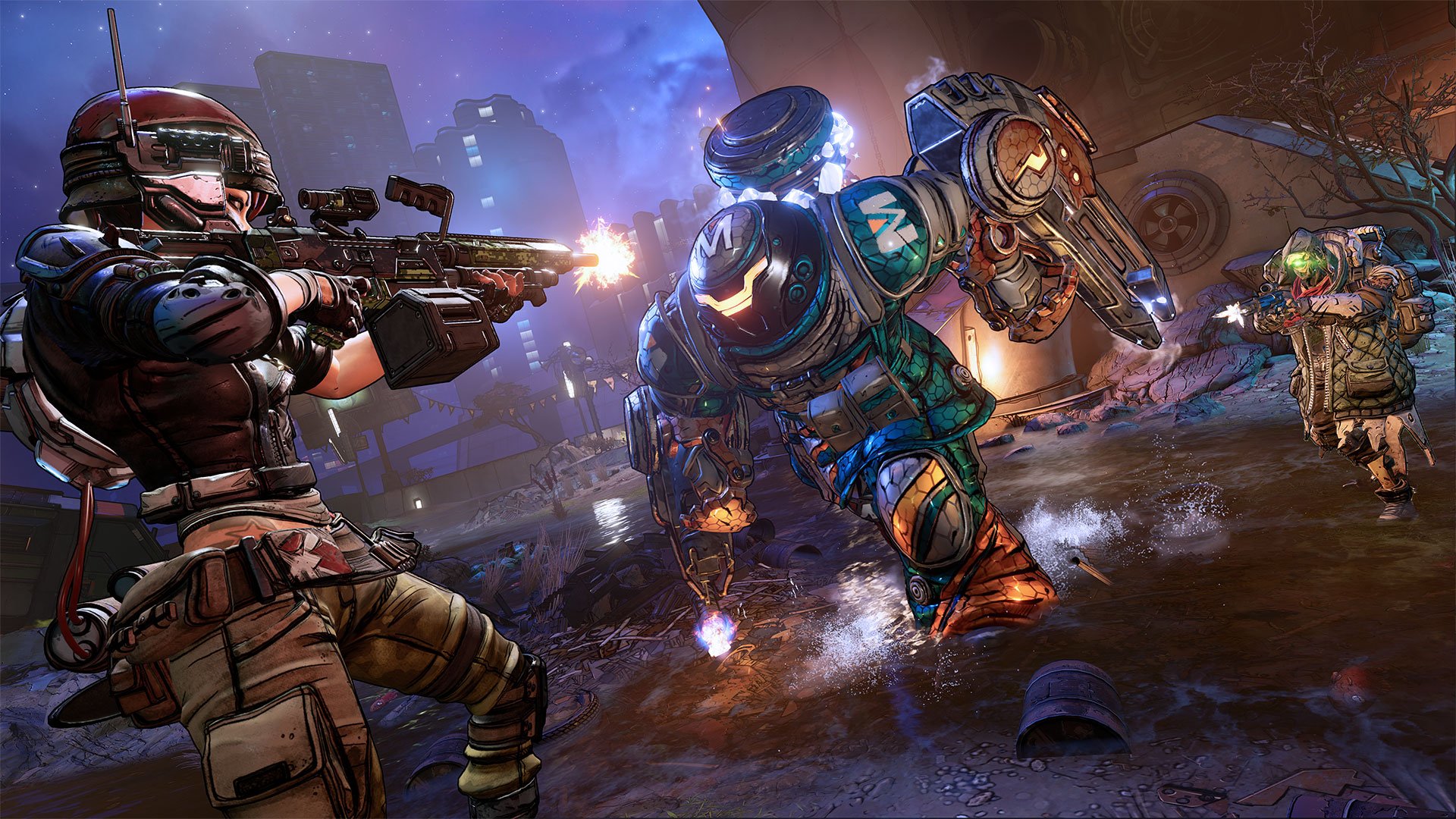 Her Action Skill is the Iron Bear, which first called to mind comparisons with Axton’s Sabre Turret or Gaige’s Deathtrap, but it isn’t one of those “set it and forget it” abilities; it’s something Moze actively takes part in. She hops into the mech, lumbers around in it for a period of time, and fires off some big guns while she’s in it.

Not only is using the Iron Bear an active experience, but customizing the mech affects how it is played. Each arm acts as a hard point to attach weapons, and there are a fair number of options. At the start of her skill trees, she has only three options: a minigun, a grenade launcher, and a railgun. Like Zane, she gets to pick two of these to use at a time; unlike Zane, she doesn’t have to sacrifice her grenade to do it.

Players can mix and match hard point attachments, so you could have two miniguns, or a minigun and a railgun, and so on. With just the starting three attachments, that already makes for six different possible setups (not counting equivalent left/right swaps). As she levels up her three skill trees, she can gain access to three new attachments, a flamethrower, a rocket launcher, and a giant clawed fist. That makes for 21 unique hard point setups, not counting the effects of other skills and augments.

When Moze starts to feel like Salvador is when she goes down the “Bottomless Mags” skill tree, with two miniguns attached to her Iron Bear. She has skills that make some shots not consume ammo, some skills that regenerate ammo, and an augment to her miniguns that increase the uptime before overheating. It feels nice to hop into the armored suit, hold down both triggers to unleash a spray of bullets, and only stop once all the bandits nearby are dead. For even more bullet carnage, she can install a rear-mounted turret for cooperative partners to hop on and spray.

Her middle skill tree, “Demolition Woman” might put her play style closer to Brick’s from the original Borderlands. It’s all about explosive damage: adding explosions to weapons that don’t naturally have them, making explosions bigger, and granting her more grenades to play with. It also has some skills that increase the Iron Bear’s uptime and decrease its cooldown time, which would be a nice complement to either of the other two skill trees. This is also the skill tree that lets the Iron Bear roam around killing things on its own even after Moze exits it.

Her third skill tree, “Shield of Retribution” is all about increasing her survivability, specifically through shields rather than health. It has skills that increase the strength of her shield, skills that automatically recharge her shield, and one that gives the Iron Bear an additional shield. More interesting are the skills that promote a risky play style, like one that decreases her health, but increases her shield by the same amount. Another gives her bonus damage for being low on health. The idea would be to stay at near-death health levels and rely entirely on shield and Second Wind to keep from dying, while outputting a ton of damage. 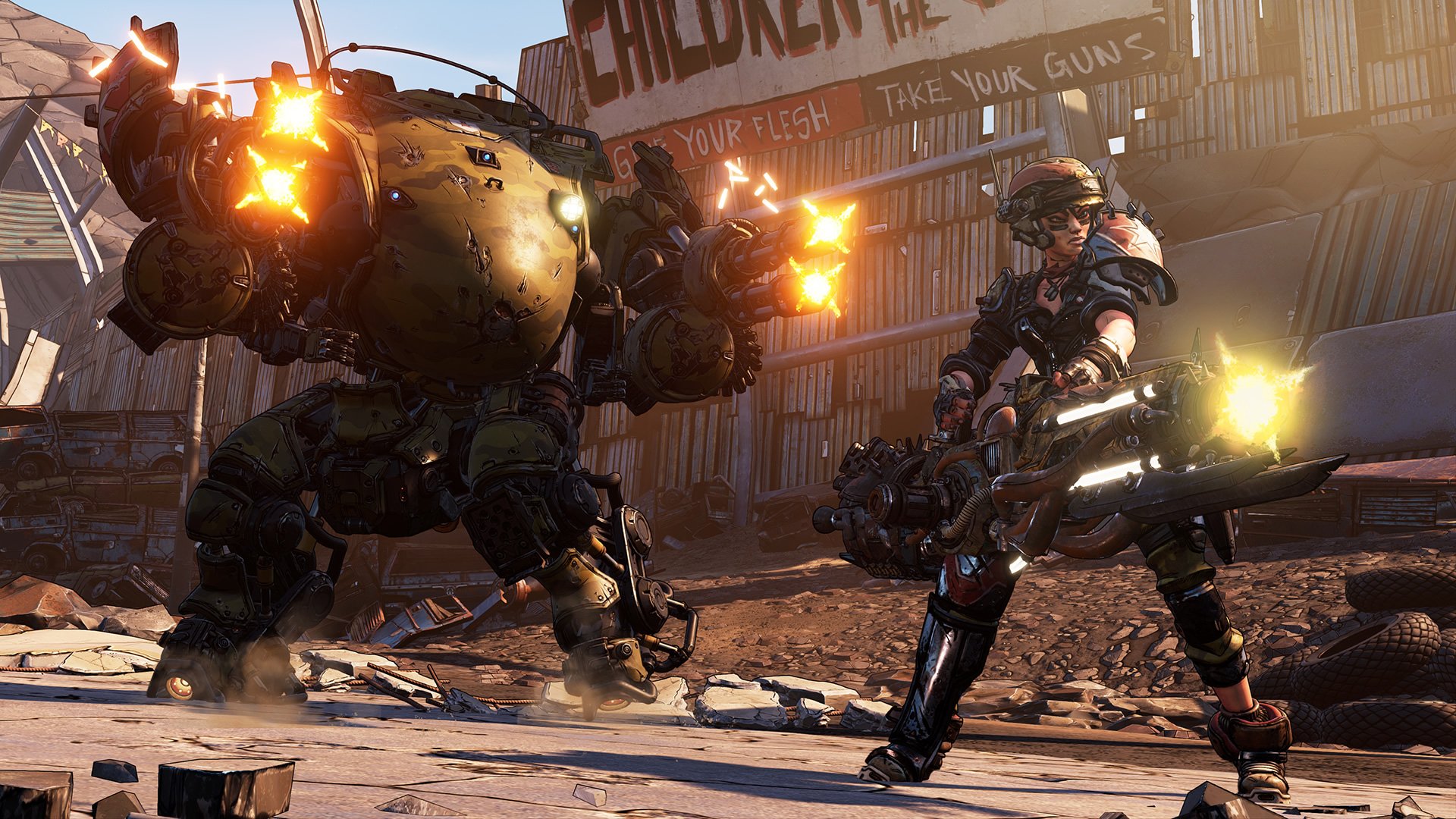 Gearbox showed off a few other new bits of Borderlands 3 at E3, like the lush, green, swampy planet Eden-6, and the new built-in social features. Now players can buy weapons their friends have sold without ever connecting to their games. It will also be possible to mail weapons and items to friends. Even people who play Borderlands solo (as I typically do for my first run through the story) will be able to interact with people on their friend lists through these features.

But clearly the big thing at this event was the full gameplay reveal of Moze. With Amara and Zane shown off last month, that leaves only FL4K still unplayed before release. (My guess is the Beastmaster will be playable at PAX West; we can circle back to see if this prediction is correct.) And who knows, maybe after playing as FL4K I’ll change my starting character again, but until then, I think Moze is gonna be my girl.