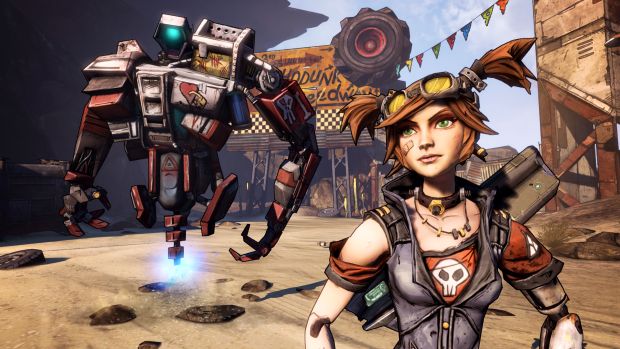 Whoa wait what?! The Mechromancer DLC is out today!? Yup, Gearbox got the latest content for Borderlands 2 finished earlier than expected so they’re releasing it TODAY! You can even go check out her entire skill tree over on the official website to see all the abilities you can give Gaige the Mechromancer.

I got to check out the now fifth playable character for the game recently, and what makes Gaige unique is that her skill tree will affect herself and Deathtrap. Her little pet science fair project is a hulking, flying robot that will absolutely wreck anything that tries to come at you.

The skill tree is also broken up in a way that will appease newcomers, average players, and those looking for an extra challenge in Borderlands 2.

The first skill tree path, Best Friends Forever, is suited for new players as it offers a lot of support features. Highlights from this path include Close Enough where you can shoot a gun anywhere and the bullets have a high chance of ricocheting off a surface to strike enemies on the field.

Most of the abilities benefit Deathtrap, such as Buck Up, where he will recharge your or your teammates’ shields whenever needed. Sharing is Caring will automatically give Deathtrap whatever shield you have equipped at the moment. Explosive Clap will see Deathtrap clap his hands together and cause a massive shockwave with huge area-of-effect damage.

Deathtrap can get incredibly powerful, and it can take a lot of damage too. He does stay out for a good while on the field when summoned, but he also has a 60-second cooldown time before he can be summoned again. You can prolong his stay on the field thanks to one of the higher-level abilities called Up Shot Robot. Basically, Deathtrap’s duration gets extended so long as he’s killing enemies. Plus, Deathtrap gets bonus melee damage allowing him to kill even faster.

The second skill tree path is called Little Big Trouble, and gives the player a lot of electric elemental bonuses. Electrical Burn will provide a greater chance for enemies to burst into flames from electric damage. Shock Storm will see a large electrical storm occur every time an enemy is killed, especially useful when there’s a large group of enemies around for a nice area of effect. Shock and AAAAGGGHHH! sends out an electrical explosion near Gaige every time she reloads.

Make it Sparkle will let you shoot Deathtrap with an elemental weapon so he can adapt the element into his arsenal. Stare gives Deathtrap a laser eye-beam attack. 1 2 Boom is a combo ability where Deathtrap releases an orb of energy that will float around the field; the player can then shoot the orb to unleash a massive explosion.

The final tree is Ordered Chaos, and it is the most hardcore of them all. The overall theme with this is trading off benefits in one area for weaknesses in another. One of the first upgrades is the ability to stack an infinite amount of Anarchy onto your guns. Every time you burn through a clip and auto-reload, the gun gains Anarchy levels which will raise your fire damage, while greatly decreasing your accuracy. You can get easily well over 150 stacks to do bazallions of damage, but you’re going to have to be close to enemies as your accuracy will be non-existent by that point.

It’s also important to never manually reload, otherwise you will lose your stack of Anarchy. It’s good to have weapons with smaller clips in this case, and it also forces you to retrain your brain from always reloading; definitely something that will be difficult for those type of players who are so used to always reloading in competitive shooters.

Another highlight from this tree is Discord. Fire rate, accuracy, health, super buffs, and more increase, but it will quickly consume your Anarchy stacks so it’s only good for a limited duration. Blood Soaked Shield will instantly restore your shield with each kill, but it will eat into your health.

These are just some examples of what each path can give you, and there’s something here for a range of players. Whatever you choose will also change Deathtrap’s appearance. Plus he can give players a second wind if he manages to kill something in time. What a good little pet robot of doom.

Gaige the Mechromancer DLC is free to those that pre-ordered the game, otherwise she’ll cost you $9.99 across all platforms.