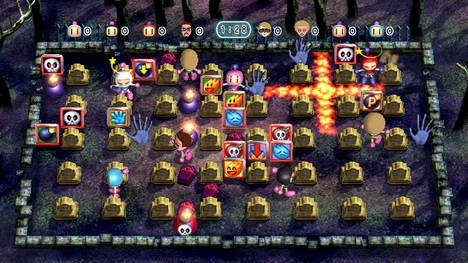 Hudson Entertainment has announced today that it will be publishing Bomberman Blast, a original Bomberman title being designed exclusively for the WiiWare on the Wii.

From what it sounds like, Bomberman Blast delivers more of the same Bomberman action we’ve come to love over the past 25 years. Of course, Hudson are throwing in a few new modes to trick us into thinking Blast is all “new.” The game does support four players locally, up to eight players online, support for Miis (BomberMiis!), and leaderboards.

No word on launch date or pricing, but Hudson says it will be hosting online tournaments to coincide with the release of the title. And can we go back to the “25 years of Bomberman” thing again? Man, I feel old. Can you hear my bones creaking?

Oh, and before anyone asks, Bomberman Blast will not feature Mr. Destructoid like the Xbox LIVE Arcade Bomberman Live. Thanks for thinking of us, though.

REDWOOD CITY, CA – August 26, 2008 – Hudson Entertainment, the North American publishing arm for HUDSON SOFT, today announced that they are releasing Bomberman Blast, an all-new Bomberman for digital download for WiiWare on the Wii. Retaining the classic features Bomberman fans have come to love such as online multiplayer battles and numerous arenas,  Bomberman Blast also incorporates new gameplay elements, including the use of Mii support and 8-person online multiplayer – the first time for Bomberman on Wii!

“The Bomberman franchise is one of Hudson Entertainment’s most popular,” said Sabine Duvall, Vice President of Product Development at Hudson Entertainment. “We’re driven by the support of the fans and strive to provide unique new gameplay features with each new Bomberman title to please the longtime fans, as well as make the game accessible
to newcomers.”

Bomberman Blast is the perfect party game, allowing players from around the world to join in on the fun. Up to four players on the same Wii can hop online. Even more, an online leaderboard shows just how good you are! Bomberman Blast is exactly what players would expect from a Bomberman game, with more ammunition, more online battles, and now,
the support of Miis!

With the release of Bomberman Blast on WiiWare, Hudson Entertainment will offer several online tournaments, including one that coincides with the game’s launch. For more information on the upcoming tournaments and to register, players can visit www.Hudsonentertainment.com.