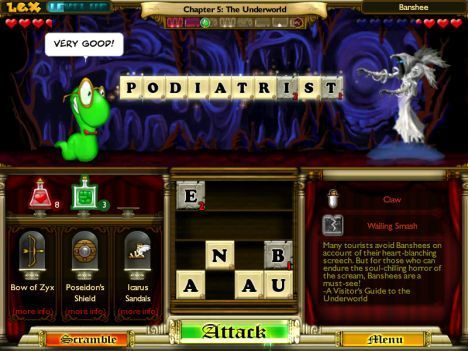 After reading a Penny Arcade that mentioned Bookworm Adventures , I became curious. While my vocabulary is not as extensive as Tycho’s (and I’m not as irritatingly ostentatious in sharing it with others), I still thought it might be fun to try out a game where you literally battle monsters by spelling out big-ass words.

If you care enough to click the little “view story” button, you’ll find out why it’s so badass.

After playing it for two hours, I can safely say that it’s more fun that you can comprehend with one hundred percent of your brain.

There’s a weird, unexplainable satisfaction in forming a word like “superfluous”, hitting “attack,” and watching the sheer length of your word result in the total destruction of an undead sorceror. Essentially, you’re given a 4×4 grid of lettered tiles, and you have to make the longest words possible during a fight in order to deal the most damage. After beating certain bosses, you get powerups and items that reward you for using certain words (like the comic mentions, one such item gives you a bonus if you use metal-related vocabulary) or just give you stat bonuses.

While the previous statement is exaggeration, it’s not as big a one as you think: apart from finding ways to create big words out of a limited amount of letters, you have to juggle item usage,  and you have to plan ahead. If you have enough letters to spell “gangs,” but a couple more letters will allow you to spell “gangrene” and get a bigger damage multiplier, do you save the G’s and the E’s for later, or do you use them now because your enemy is draining your health quicker than you expected? As ridiculous as this sounds in reference to a game whose protagonist is a giant, bespectacled worm, there is actually a degree of strategy here.

Popcap Games has a free demo , which sounds unimpressive, but it’s about a third of the full game. I’ve been playing for about two hours and I haven’t finished the demo yet. I’m not even necessarily recommending you purchase it–despite how fun the game is, 30 bucks is a hell of an asking price for what essentially plays like a beefed-up flash game.

Still, it is, at the very least, worth a download. If you’re like me, you’ll fall in love with it the moment you successfully use the word “zoetrope” to kill a demon hound.

While it’s understandable that the game doesn’t recognize curse words–it’s supposed to be kid friendly–there’s no excuse that I can’t use the word “whore” as a weapon. It certainly works like one in real life.