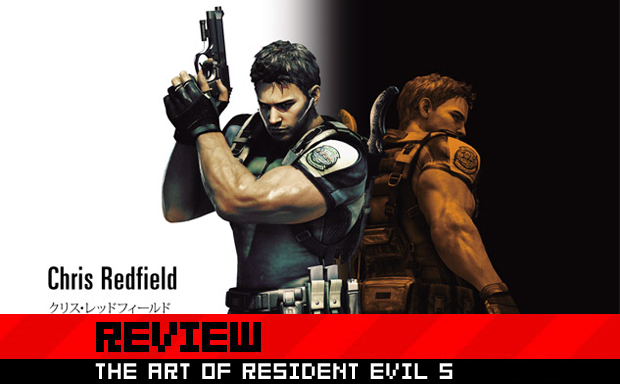 Here’s another secret about me: I wasn’t too crazy about Resident Evil 5. For a variety of reasons, it just didn’t meet my expectations. It’s a great game, but it’s not the follow-up to Resident Evil 4 that I wanted.

This is a big book — 205 pages long, to be exact. It consists of polygon-based renders of in-game characters, a lot of hand-drawn artwork, loads of comments from the game’s artists, a couple of interviews, and even a few photographs. Most of the renders won’t be new to fans of the game, but thankfully, they’re greatly outnumbered by hand-drawn stuff. Capcom may not produce as many hand-drawn-looking games as they used to, but their behind-the-scenes 2D artists are as talented as ever. Character design, creature design, background design, storyboards — it’s all hand-drawn, it’s all real, and it’s all spectacular.

In most of Udon’s “The Art of [insert game]” books, there’s a section in the back that details unused designs. That’s always my favorite section, because that’s where most of the new stuff hides. Not so with this book. The new material is all over the place. Almost every character and creature has at least one unused design. Other than the Gatling gun Manjini and few of the other more straightforward enemies, everyone has an alternate look. Most of the time, they looked even better. Chris’s arms were almost normal-sized. Sheva and Excella were even hotter. The Executioner had a knife through his head (which is not explained). There were seven different types of Lickers. The list goes on and on. I want to describe it all to you, but this paragraph is already way too long. Suffice it to say, the book is packed with Resident Evil ideas that you’ve never seen before. There is enough new content here to fill a whole new Resident Evil game, maybe two.

So why was all this awesome stuff cut out? That’s explained in the multiple interviews with the game’s designers and producers. There, we hear firsthand how Resident Evil 5 transformed from a more traditional single-player survival horror experience to the co-op-focused action/horror hybrid that was released at retail. You can sense that an enormous amount of passion and creativity was poured into the game, but that it was met with equal amounts of pressure to both please series fans and pay off at the mainstream gaming market. It also sounds like the game’s producers caught a case of Hollywood fever. There’s a section in the back showing the fully costumed motion capture actors. It looks like they’re filming a Resident Evil movie, potentially a good one. It’s both cool and depressing at the same time.

Right before that section, there are 26 pages of other material that was totally scrapped from the game. There are storyboards for a completely different storyline, background designs for areas that never made it to the game, gameplay concepts left unfulfilled, and tons of unused enemies. In these 26 pages, you can see a totally new game, a game that in many ways resembles a fantasy I once had about a Resident Evil 5 remake. Traditional Romero-style zombies; infested American-looking cities; multiple NPCs to save (or see slaughtered); bizarre, genuinely scary new creatures; and even the Resident Evil super-boss, the Tyrant; they were all supposed to be a part of Resident Evil 5 at one point. It’s hard to imagine how the game would have been worse off for their inclusion.

The art that that went into the Resident Evil 5 that Capcom released, and the art that went into the game that they almost made, have one major thing in common: it’s all awesome. The craftsmanship here is exceptional. Any budding artist that dreams of working on a triple-A game needs to buy this book. You will learn from it. From backgrounds to costume design to creature design to storyboards to 3D models and textures, it doesn’t get much better than this.

The only downside here is that none of the design work from the Resident Evil 5 DLC made it into the book. It would have been cool to see the creature from “Lost in Nightmares,” or Barry Burton, make a guest appearance in these pages. Maybe we’ll get an addendum sometime down the line that will meet that need.

It doesn’t feel totally fair to hold that complaint against Udon. The Art of Resident Evil 5 delivers. I can’t imagine a more complete and compelling look into the process behind the creation of this monumental blockbuster title. The best part is, the book makes me like Resident Evil 5 more, and it shows me how much better the game could have been. The only downside to it all is that my predictions (and expectations) for Resident Evil Revelations are now even more overblown than they were before. Will the game have a Tyrant, a huge arena battle featuring multiple El Gigantes and vunerable NPCs, and devilish hallucinogenic-gas-producing octopus-headed maniacs? If even a few of these unused concepts in this book make it into that game, it could result in a new Resident Evil classic. The game can’t come soon enough.

I think I’ll read this book another 50 times while I wait.

Score: 9.5 –– Superb (9s are a hallmark of excellence. There may be flaws, but they are negligible and won’t cause massive damage to what is a supreme title.)