Capcom’s Street Fighter games exist in a strange reality. They’ve got the hugely muscular characters usually found in American comics, the “so good at martial arts that I can throw magic from my hands” logic usually seen in manga and anime, and a few celebrity guests like Bruce Lee, Andre the Giant, and Mike Tyson thrown in to boot. There isn’t another sci-fi/fantasy reality that’s quite like it.

Although this world first saw light in the realm of videogames, it has since spread to books, comics, TV, and movies. Over the years, Capcom has built an official canon for the characters and events in the Street Fighter mythos, although it’s hard to know what’s official and what’s not due to the multitude of different Street Fighter stories out there. The good people at Udon comics have sought to rectify that situation, with the first official guide to the people and events of the world of Street Fighter. The information here wasn’t just “made up.” It has been taken from “a variety of official sources – game endings, game documentation, discussions with the Street Fighter producers, and Japanese source books such as Street Fighter: Eternal Challenge, and All About Street Fighter.”

It was a monumental task to collect all the official info on the major and minor players of the Street Fighter mythos. I’m impressed that they even tried. Read on to find out if they managed to pull it off. 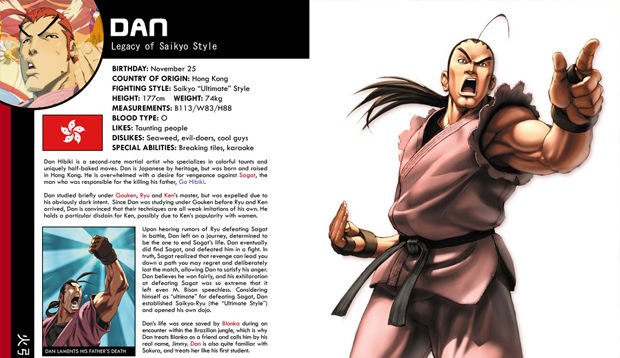 Ah, well. Maybe Udon will put out a second Street Fighter encyclopedia that includes those more obscure characters. There’s some indication that this will happen, as there’s a big fat “0” at the top of the spine of this entry, which I’ve inferred to mean that this could be book “zero” in an ongoing series. Why is it book “zero” and not book “one”? Probably because this is Street Fighter we’re talking about, a universe where one takes place before zero, and four takes place before three. Dyslexic use of numbers is part of Street Fighter‘s charm.

All numbering quibbles aside, the information here is clear and concise, and has that Street Fighter mix of seriousness and comedy down pat. You get a recap of Sagat’s progression from a revenge-crazed maniac to a man at peace with his place in the world, and the definitive word on how Gouken returned from the dead in Street Fighter IV. You’ll also find out Rainbow Mika’s real last name (Nanakawa) and  her primary dislike (rude youngsters). Her Alpha 3 costar Karin’s greatest dislike is “middle class ideals.” That makes me wish that they both went to my high school. They would have kicked the crap out of most of the kids that I didn’t like. 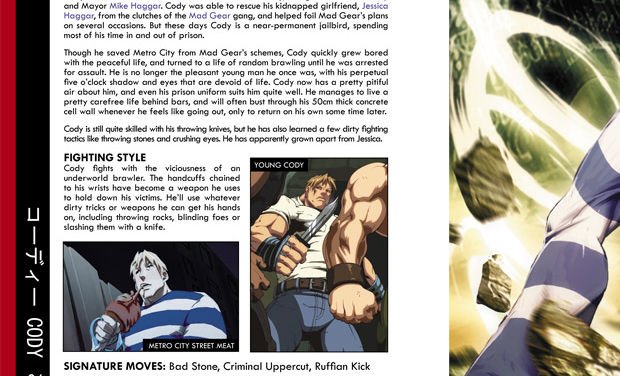 That’s not all of the little details that the book provides. That index I was telling you about is full of surprises. There are profiles on each of Street Fighter 3‘s Judgement girls; info on Bison’s nine other dolls; a nice mini-write-up on Guile’s oft-forgotten brother, Gunloc; and the final word on Mike from Street Fighter 1 (he’s not secretly a girl). Of course, there’s a lot more to it than that, but if I tease any more, Udon will get pissed at me for giving away all of their book’s secrets. You’ll just have to check it out for yourself.

No review of an Udon book would be complete without a mention of the art. Each of the 60 main profiles get at least one full-page illustration (more for more important characters like Ryu and Seth) from the likes of Udon’s regular team (including Alvin Lee, Jo Chen, Arnold Tsang, Jeffrey Cruz, Joe Ng, Gonzalo Ordonez, Omar Dogan and more). That’s a lot of art, and a lot of artists. A fair amount of the visuals here were taken from the covers of previously printed Udon comics, but a lot of it is brand new. As with most Udon books, the artists here range from great to fantastic. Doe’s work on Andore, Birdie, Sagat, and Balrog is particularly compelling. He’s really captured the characters perfectly, with a style that is both technically impressive and emotionally evocative. It’s nice to see these often overlooked characters get a little special attention for a change. 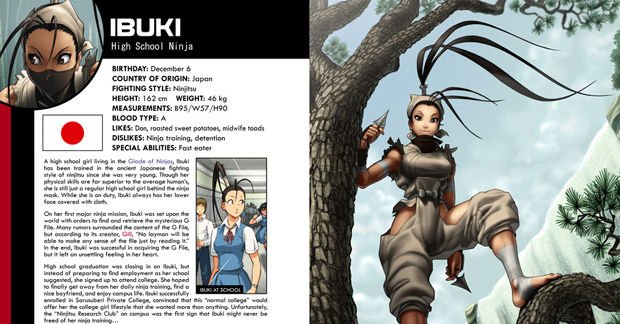 Other than a typo or two, and the previously mentioned omissions of a few games from the Street Fighter Universe, this book is pretty much perfect. The only other complaint I have is that unlike the Official Handbook to the Marvel Universe series that I grew up with, there’s no specific mention of how much these Street Fighters can bench press. So much for my winning bet that Ryu can bench more than Ken. Ken’s probably on the juice anyways. Those flaming uppercuts are highly suspect.

In summation, the Street Fighter World Warrior Encyclopedia doubles as both a first-class art book and definitive guide to the world of Street Fighter. It’s also priced right at $13.99, nearly half the price of most gaming art books. If the Street fighter series means more to you than just strategy and competition, and if you want a better understanding of these continually enduring fighting game icons, then you need to pick up this book.