Fox N Forests doesn’t really have the most appealing name. It sounds a little like a generic mixture of canines and arboreous backgrounds, so I wasn’t quite sure what to expect. The press e-mail we got before PAX had some wonderful looking pixel art, so I figured I would give it a shot. At this point, I’ve been surprised by enough random games that Fox N Forests could really be special.

Thankfully, it was! I won’t proclaim that this game is some modern classic, or a reinvention of 16-bit style gameplay, but Fox N Forests manages to do something unique with an old genre that engaged me enough to finish the PAX demo. The man I spoke with from Bonus Level Entertainment was very eager to get me into the game, so he had me try out both the PC and the Switch ports they had running. 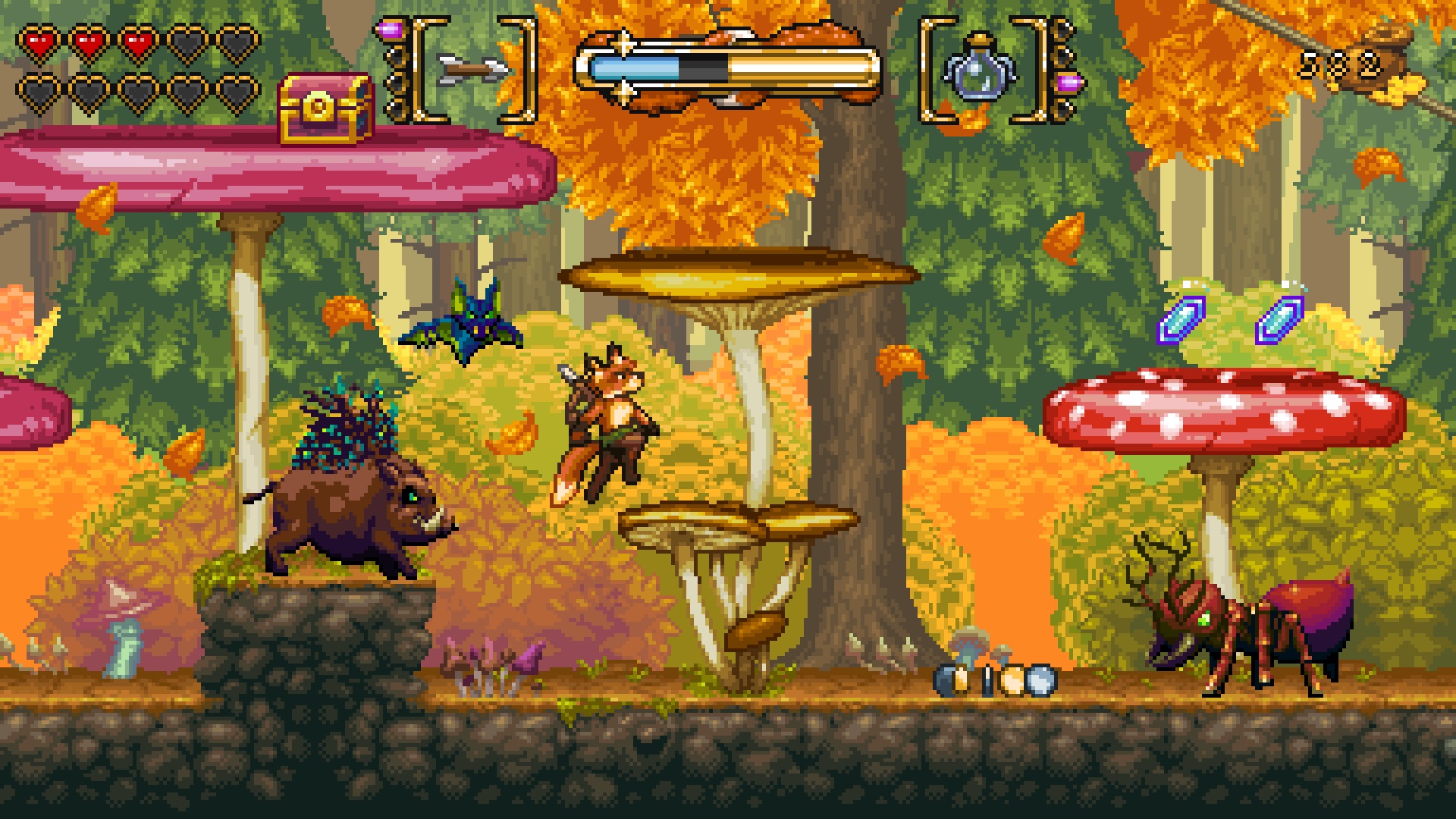 I can’t come to grips with using a joystick in a 2D platformer, but this game runs absolutely fine on Switch. No slowdown, no real degradation in graphical quality; this is a really solid Switch port that definitely scratches the itch left by Nintendo’s lack of Virtual Console on the device. As for how each version handles, there were no differences between the two ports on the show floor.

One of the big inspirations behind Fox N Forests is Mega Man X and while I can sort of see that influence, I’d actually go so far as to say this game has more in common with pre-Symphony of the Night Castlevania than any of Capcom’s games. While the main aim is to reach the right side of the screen, the journey there is entirely up to you.

In a neat twist, though, secrets strewn about the levels will require you to find power-ups in later areas and then make your way back. Why you would want to do this is because of some hidden collectibles that unlock bonus levels in each world. How all of this mixes with the game world is pretty organic, since the central mechanic of Fox N Forests is the ability to change seasons. 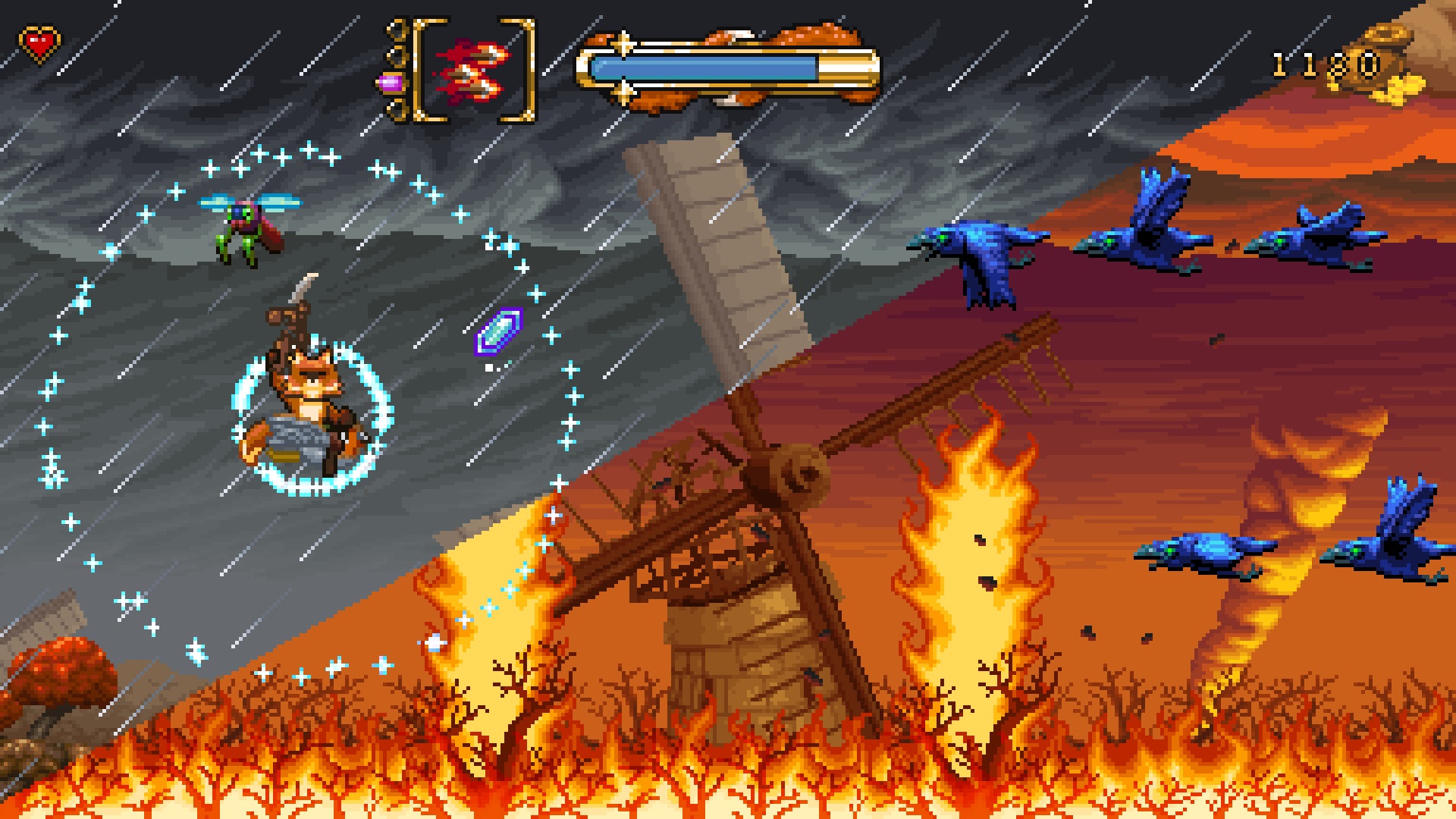 Yes, in a possible ode to the oft forgotten Legend of Zelda: Oracle of Seasons, your main character has the ability to alter the season of each level on the fly. While you aren’t picking which season the level will turn into (that is determined by the area you are in), the mechanic is woven into everything from alternate route,s to puzzle design and even combat.

The best instance of this comes into play with an electric eel enemy. While he is jumping in the air trying to hit you, you can change the season and freeze the water he leapt out of. He’ll crash and die, leaving you free to making the jump across without interference. Some of the puzzles have boxes hidden behind a blossoming tree which, changing to Fall, will allow you to reveal their location easier, or even create floating platforms that you can jump on (in the form of leaves falling from the trees).

The art direction represents this beautifully, with a lot of background detail working to make the game feel alive. The one that stuck out to me was a baby chick sleeping in a nest until I jumped past it, this woke the bird up who started to squawk. There are details like this all about the game world and it just oozes dedication from the team. This is exactly the kind of stuff that has made Nintendo games feel so vibrant over the years and something I wish could come back into style. 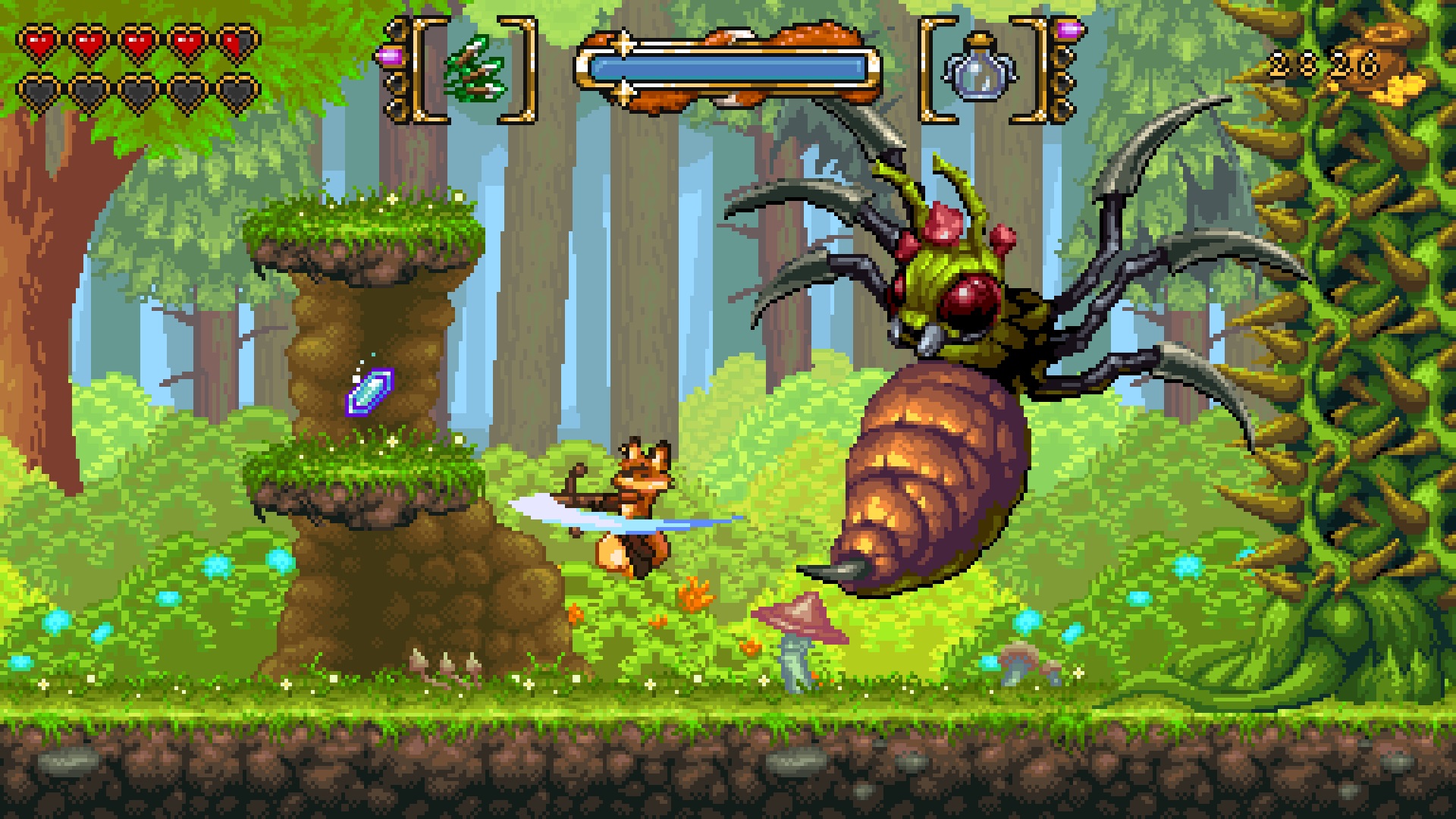 I mentioned to Bonus Level that I liked Fox n Forests level design, because it was so vast. While they could have boiled them down into being linear, they feel like something from Sonic the Hedgehog with the amount of different paths through any segment. It could almost be called a non-linear platformer, but you’re still making progress from “World 1-1” to “World 1-2” without skipping anything. That being said, “World 1-1” could potentially be three levels unto itself, so that is a very neat accomplishment. It’s better than just repeating Mega Man X for the millionth time.

What I don’t necessarily like is that the combat is a little convoluted. When standing still, your character shoots a crossbow that you can modify with different ammo types. When crouching, you’ll swing a knife. Jumping also sees you swinging your sword, with modifiers coming in depending on whether or not you’ve double jumped.

While I can understand wanting to emphasize different ranges, it definitely sucks that you can’t shoot your crossbow in-air. I constantly forgot that I couldn’t use a ranged attack in the air. This ended up with me colliding into a lot of enemies I would have otherwise dodged if they were dead. All I would like to see is a dedicated melee button or even the ability to fire arrows in the air. Otherwise, the game is pretty damn fine.

I’m eager to see what the end result will be for Fox N Forests. Generic name aside, this game feels like a lost SNES title in the vein of Konami’s classic Castlevania series and that has me excited. As an added bonus, it’s also just damn beautiful to look at.