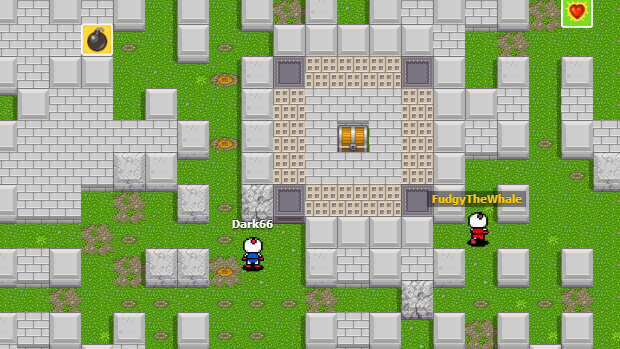 Almost a year ago, I wrote about a 100-man version of Bomberman which was, in reality, just a single-player game with 99 CPU opponents. At the time, I lamented that a truly massive multiplayer Bomberman didn’t exist. That was then.

This is Bombermine. It’s a browser-based multiplayer game based on the core elements of Bomberman and capable of supporting up to 1000 players simultaneously.

It winds up being a very different game from traditional Bomberman. First off, the goal is different, as it would be highly impractical to expect as many as 998 people to sit around and wait for a victor. Instead of trying to be the last man standing, Bombermine moves to a score-based approach where players have their kills and deaths tallied over a set length of time.

To handle the player size, the play field is huge and occasionally recycles blocks into decimated areas, allowing them to be destroyed again in search of power-ups. Most of the standard Bomberman classics are here, including the bomb kick, remote bombs and roller skates. Oh, and viruses, which can flip your screen or turn you into South Park’s Kenny (and, therefore, harmless). And rounds end with Pac-Men devouring the landscape around you.

Bombermine is doing a beta thing right now, with a few running servers and a healthy number of people playing. The embedded chat bugs out a bit and there’s no sound, but it’s a good bit of fun that you should probably take a look at before Konami does.