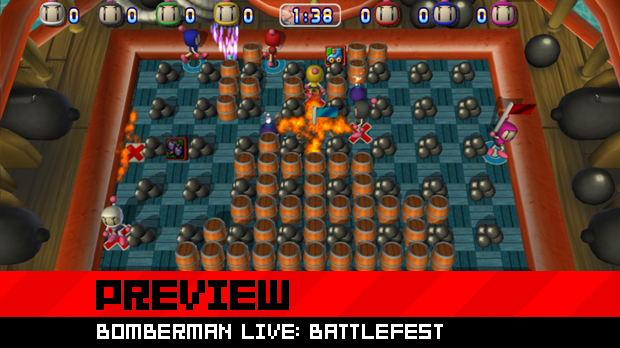 It’s not a year in gaming without a new Bomberman game from Hudson! Bomberman Live: Battlefest is the latest in the Bomberman franchise and it’s coming to Xbox Live Arcade early next year. Battlefest will be bringing with it several new multiplayer modes to keep players engaged for a while. Not only that, but you’ll also be able to use your Avatars to play Battlefest.

There’s plenty more to talk about on the new Bomberman and you get all the details by heading past the jump.

There are a total of 12 game modes in Battlefest with up to eight player support (four through local play). Eight of the modes are single-player modes and the rest are team based. The team based modes were actually the most requested feature by fans. And on the subject of the modes, a lot of them actually were influenced by first person shooter games.

The team looked at FPS games to try and keep the Bomberman franchise fresh. It’s blasphemy to change the mechanics of a Bomberman game (COUGHBOMBERMANACTZEROCOUGH), so they brought in these new modes such as Capture the Flag, Capture the Crown (hold on to the crown the longest), VIP and more.  Other modes will include Zombie and Paint Bomb, both of which have you paint the most tiles in a level with your bombs before time runs out. Another mode, called Bank roll, has you buying power-up items before the start of a the round and you gain money throughout the match.

Battlefest will come with 15 new levels. One level is based on Adventure Island, one level looks like an old TV monitor and another level is set on a pirate ship. A new feature in Battlefest is that levels have things going on in the background now, some of which that can effect gameplay. One of the coolest features from a level in my opinion is the Pirate Ship level. The ship is getting rocked by waves and bombs and power-up items will actually move back and forth on the map as this happens.

All the costumes from Bomberman Live are included in Battlefest on top of many new ones. Sadly, the DLC costumes from the first game won’t be included so no Mr. Destructoid. If you for some reason don’t like any of the Bomberman outfits, then you can play with your Avatar instead. Yup, you can blow up your friends as your Avatar this time. Whatever you’re wearing, even the Halo helmets, will show up on your Avatar in multiplayer.

As for controls, well, it’s Bomberman. You blow up objects, gain power-ups and try to blow up other players. It’s the same game you’ve always known, just with a bunch of new features. There’s going to be three DLC packs coming out after the game is released and each pack will feature two levels, two characters and one Achievement. Little upsetting that the DLC stuff is already done before the game is released, but they’re not the type of DLC that you need to own at least.