Codemasters’ Stuart Black is a man who likes his videogame guns, and he’s so passionate about them that he wants to impart his affection for virtual weapons to you. He wants you to understand the feeling of firing a gun, and he also wants you to appreciate the power that a gun possesses. “I’m more anal than anyone on the planet about simulating, or replicating, the sensation of a bullet hitting a wall,” he told me before a demo of Bodycount, the debut game from Codemasters Guildford. “It’s got to be fun to fire the gun in an empty room. If that doesn’t put a great big smile on your face, then we’ve failed.”

With Bodycount, Black is seeking a spot alongside gaming’s greatest first-person shooters — the Call of Dutys and Half-Lifes and Battlefields of the world. So how can this game stand out in the crowded FPS genre? As Black explained, the shooting experience itself is of paramount importance: that was the design philosophy behind Black, the Xbox/PlayStation 2 game he co-created and designed at Criterion Games, and he wanted to bring that same type of shooting to Bodycount.

But the shooting in Bodycount isn’t the only unique aspect of the game. It’s an ambitious project, and Black sat down with me to explain its many facets, both before and after I tried it out for myself. 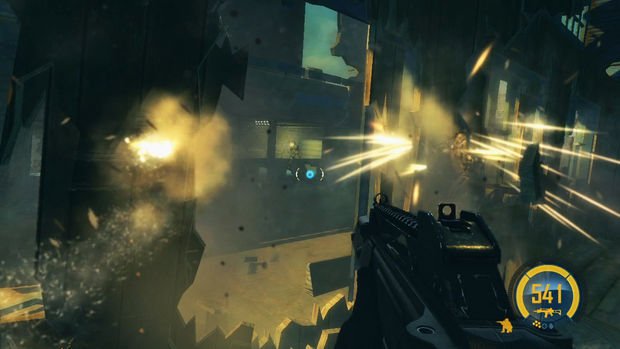 The first description of Bodycount that Black gave me was that it’s a “very pure, very focused shooter”; the next was that “it’s all about the guns, and the effect that [they] have on the world when you squeeze the trigger.” In that sense, this game aims for realism: for every bullet you fire, you will see a response — if you don’t hit an enemy, the bullet will leave a noticeable mark on the environment. In fact, most of your surroundings are destructible. Why not all? “We could shred the whole world if we wanted to,” said Black, “but you don’t want to, because there’s not a lot of gameplay in that.”

Bodycount is certainly a linear game, but it allows the player to tailor the gameplay experience to his style. You always have a silenced pistol at your side, and you can carry two additional weapons. So you can choose how you want to proceed at certain points — perhaps stealthy, using the pistol, or maybe loud and guns blazing, tearing up the environment as you go. Either way, staying in cover (which is destructible, of course) during firefights is essential for survival. Bodycount has a cover system that’s reminiscent of Killzone 2. There’s no iron sights view in this game; instead, clicking in the right stick simply zooms in on your reticle, and the left trigger puts you in cover. From there, you have full control of your movement with the left stick — you can lean in either direction, or peek out from behind cover. 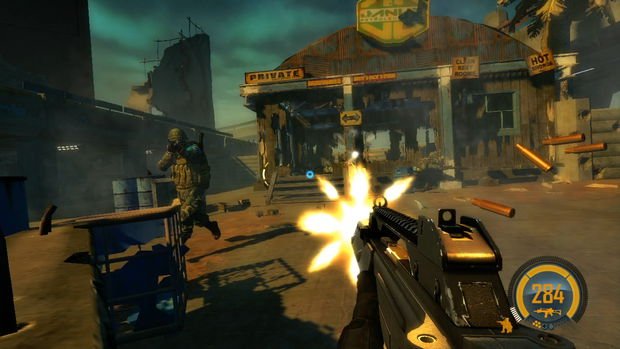 Black explained to me that he’s tired of shooters that take themselves seriously, which is why Bodycount is a bombastic, over-the-top experience that’s grounded in reality, but not constrained by it — a “stylized, balletic orgy of shooting and shredding [the environment],” as he put it. He named a number of personal inspirations, and explained their relevance to the game. Bodycount gets its “sense of outrageousness” from the work of Garth Ennis; a “retro-modern,” “glossy” feel from Lady Gaga, whom Black described as having a “seventies vibe,” but with a “modern twist”; and a plot filled with ambiguity, mystery, and strong character arcs from J.J. Abrams. These influences combine to make Bodycount a “glossy techno-thriller” that has a “toehold in reality,” but takes liberties with it without getting into sci-fi or fantasy territory.

You play as Jackson Delgado, a young hotshot who’s full of himself; he’s used to getting himself into sticky situations, but he always has the wherewithal to get himself out of them. He’s recruited by the Network, a “super-secret Illuminati-type” shadow organization whose operatives work against other networks designated as “targets” — Black described these individuals as “neo-Nazi nutjobs, serious fruitcakes that need to [be] put down; definitely evil scumbags,” but he slyly noted that that doesn’t necessarily mean the Network are good guys. Upon accepting your mission, you’re drugged into unconsciousness; the next time you open your eyes, you’re thousands of feet above a battlefield in Africa, hurtling toward the ground. Sounds nuts, doesn’t it? This storytelling approach creates parity between the player character and the player’s experience — in other words, you know just as much as Delgado does about what’s going on.

You’re a mere combat asset for the Network; Delgado is guided by a sexy operative, Jane, who refers to him only as “John Doe,” or “John” (Black pointed out the connotations of this nomenclature: prostitutes refer to their customers as “johns”). Jane works for a handler, a posh English gentleman who seems warm, “but you can tell he’s lying because his lips are moving.” Your main target is a “fierce femme fatale,” and the two of you will meet a few times throughout the game. The way you behave with her will affect certain parts of the game — while major plot points won’t change, the people you encounter (and where you encounter them) can. 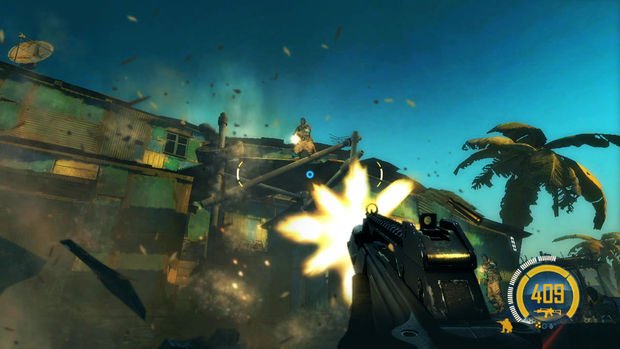 The name of the game is “overt assassination” — as opposed to covert — “in global conflict zones,” and Africa is where you begin. There, the local militia is fighting it out against a larger military force, and you get dropped — literally — right in the thick of it. In this “asymmetrical warfare,” as Black called it, you take on groups of four to eight enemies who behave as squads with distinct classes. So fighting them entails some strategy on your part — for example, you might want to seek out the Medic and deal with him first, so the remaining soldiers won’t get healed, or you could get rid of the Scavenger so he doesn’t scoop up the intel that’s rightfully yours.

Intel is the currency and “score” of Bodycount. Collecting it lets you upgrade Jackson and his weapons, and it also unlocks other content. You’re going to have to work for it, though. On the African battlefront, you can simply let the two sides take each other out, but you only earn intel if you do the killing yourself. Accordingly, you can figure out tactics to maximize intel drops, but there isn’t necessarily one best way to do that; Black wants gamers to be able to personalize their experience.

Black played through the Africa demo himself and then handed the controller to me. I’d consider myself pretty good at shooters, but I was hampered by the inability in the pre-alpha build to invert the y-axis, so I’m glad I got to see Black show me how the game’s supposed to look. The game’s wide color palette struck me immediately. It’s not your average brown current-gen shooter; instead, since the Africa segment takes place in a shantytown, the environment contains a variety of greens (makeshift housing) and grays (concrete structures). 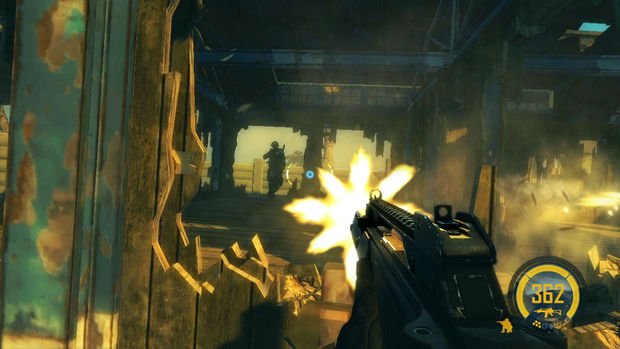 But the first thing I noticed, even before the colors, was the gunplay. Just as Black had promised, the shooting in Bodycount is terrific, providing an array of sensory input to process — a satisfying punch in terms of feel; a bright muzzle flash; and a thunderous report from the barrel. That’s not to mention the bullet impact effects, which Black heralded as “best-in-class” while cautioning their half-done state: I thought the destruction in Battlefield: Bad Company 2 was impressive, but much more of the environment in Bodycount can be torn apart, and you don’t even need explosives to do it. Bits of wood and chunks of concrete were flying everywhere during battles, and the detritus was strewn about the ground after fights concluded.

The objective in this particular area was a monolithic structure in the distance, a nigh-impenetrable building that, once taken for the Network, would reduce the influence of the enemy in this area of the world. But in order to get to it, I had to fight my way through groups of African soldiers, all the while receiving strange, innuendo-laced guidance and tactical support from Jane. “Good morning, John. Welcome to the Network. Please be aware that you are in a hostile zone… and that you are hot,” she said in my ear, as I came upon the first battleground.

Bodycount’s combat is where its arcade nature surfaces. Kill an enemy, and a bright red orb of intel pops out of him; dispatching multiple soldiers in a row adds to your multiplier, so racking up streaks of kills gives you more intel. Soon, I encountered my first Psycho Tank, a behemoth with a .50-caliber machine gun who requires some ingenuity to take down. My cover was disintegrating quickly in a hail of bullets, so upon being reminded by Black that I could “rip the shit out of those environments,” I blew a hole in the wall of a nearby building — using bullets alone — and flanked the slow-moving gunner. 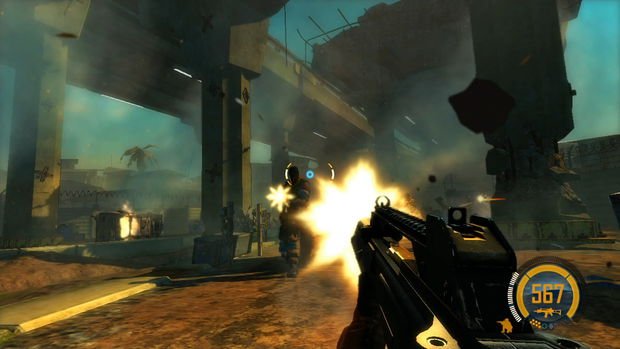 I had to stop at that point, but I wanted to keep playing. Bodycount is looking solid already, even though the enemies in the version I played weren’t yet imbued with class-specific squad behavior. But what I saw was very promising, and with the intrigue offered the game’s unique storytelling method, I’m already interested in it as more than just a shooter. According to Black, Bodycount will be out in the first half of 2011.

Filed under... #Codemasters#Destructoid on assignment