If the devil walked the Earth today, he’d probably be a televangelist

The Bobby Throne Saves the World booth at PAX East is adorned with free coins and pamphlets, all necessary marketing materials to help spread Bobby’s important message. A boy who has approached the booth stands a less than a foot away from a large television. He’s looking at Bobby, who is in the midst of preaching to his congregation. What makes Bobby different than most televangelists is that he can interact both with his live audience, and the people watching him on TV from the comfort of their own home, with the same level of intimacy. He’s also a character in a virtual reality game, but we’ll get to that later.

The boy, staring at Bobby and his flock on the other side of the screen, asks “Are you gay?” Bobby, not missing a beat, responds “It doesn’t even matter. What matters is the Coin, and the answers it can reveal. I may be on this side of the Coin now, and you little brother may be on the other side, but remember, it’s a thin wall that divides us. Through my teachings, you may someday harness the power of the Coin, flip it and reverse it. Take solace in that, my son.” The boy laughs. 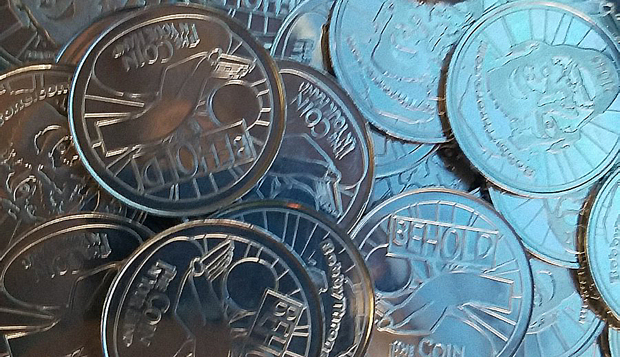 Bobby Throne Saves the World is a virtual reality game where you play as Bobby Throne, the leader of Bobby Throne Ministries. Playing the game is like putting on a digital puppet show. You control what Bobby says and how he moves in real time, as you view your virtual audience, and the real life audience watching you over webcam, all in first person. The goal is to gain more followers, though right now, the path to making that happen isn’t 100% clear. What we do know is that the game will involve both traditional gameplay and a new kind of live audience participation that will blur the line between performance and game design.

I’ve long been of the opinion that most games and organized religions use similar techniques to capture people’s investment. Both offer the faithful a set of rules to follow, mythologies to fit themselves into, and the promise of power and glory for following the rules properly, and maybe most importantly, big rewards for keeping the faith.

A good game developer can make you feel real feelings about unreal things happening in another reality. A good religious leader can do the same thing. Those real feelings can lead to real beliefs, and eventually, real actions. More often than not, those actions eventually involve giving the game developer or religious leader in question a lot of money. There’s nothing like brand loyalty and the promise of happiness on “the other side” to get people to open their wallets.

How much Bobby Throne Saves the World will explore these ideas, and where it will draw the line between irony and sincerity, all remain to be seen. If the goal here is to draw comedic parallels between gaming, religious edutainment, Lets Play personalities, and the art of the deal, Bobby Throne‘s developers won’t be want for material to pull from. With all the various cultivated identities and related cult-like behaviors bouncing around on the internet today, it’s already easy to feel like you’re in the midst of a larger scheme, where the the the roles of entertainer and a puppet master are just two sides of the same coin.