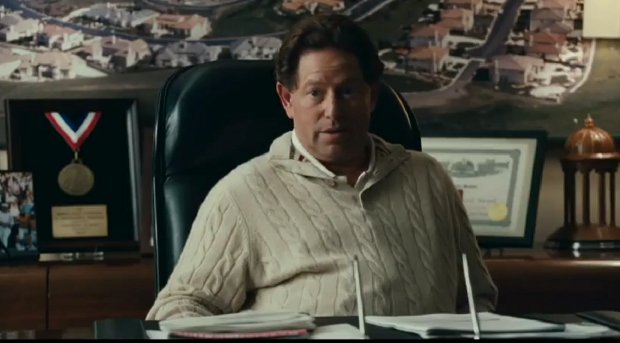 Well, it looks like we’ve finally found out why Bobby Kotick, CEO of Activision Blizzard, is in Brad Pitt’s new movie Moneyball. Kotick happens to be pals with director of the flick Bennett Miller and agreed to play a part in the film as long as Miller would direct a short film for him.

The short film in question is a piece for The Call of Duty Endowment (CODE), Activision’s non-profit organization that aims to help former soldiers gain careers in their post military lives.

“We were having dinner and Bennett was talking about Moneyball and he asked me a little bit about an owner’s psychology and what an owner would be like. I started reading the script and I said, I really think the words don’t capture how an owner would react to this part of the conversation. I also loved Michael Lewis’ book Moneyball. We were having this back and forth and Bennett said ‘why don’t you do it? It would make the role very authentic.And I said, I will, but only if you made my Call of Duty endowment movie.”

If you’re dying to see Kotick on the silver screen then you can catch him and Moneyball in theatres September 23. The date for the CoD Endowment short is still to be TBD but don’t you fret, the Call of Duty: XP fan event is a thing we do have a date for (September 2-3) and it just so happens that we have four tickets to give away!

Bobby Kotick is Acting in Moneyball for Charity [1Up]