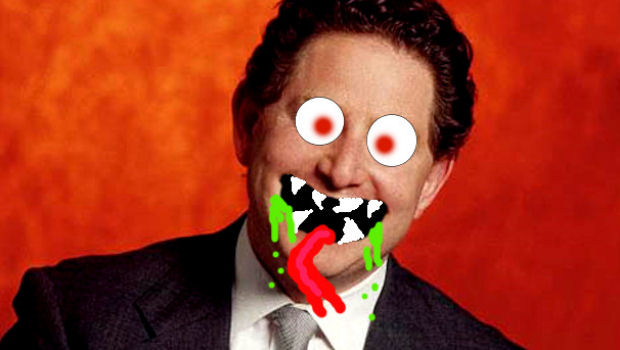 Evil Activision CEO Bobby Kotick has claimed that he is frustrated by the current online business model put out by Microsoft. Of course, it’s not concern for consumers or the simple fact that Xbox Live is a massive con that has upset the flame-haired demon, it’s classic greed. He’s just annoyed that Microsoft benefits more from Xbox Live than publishers like Activision.

“We’ve heard that 60% of subscribers are principally on Live because of Call Of Duty,” Kotick said. “We don’t really participate financially in that income stream. We would really like to be able to provide much more value to those millions of players playing on Live, but it’s not our network.”

“We have always been platform agnostic. [Consoles] do a very good job of supporting the gamer. If we are going to broaden our audiences, we are going to need to have other devices.”

Kotick actually raises an interesting point, that Microsoft is able to benefit from any game you’d buy Xbox Live for, and the publisher of that game doesn’t benefit outside of the initial sale. That said, however, this stuff never sounds good coming from an Activision executive, especially one who thinks fans are “clamoring” for a subscription-based Call of Duty. I’d rather have Microsoft nickel-and-diming us than Activision, if one company has to.