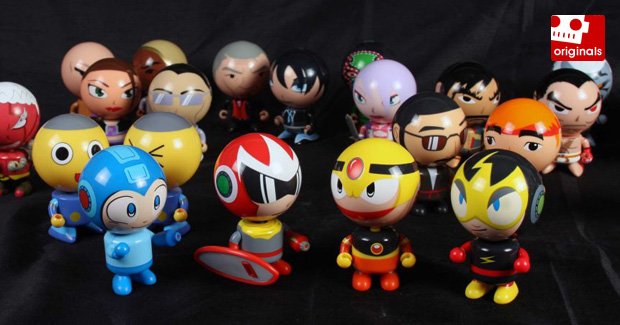 Being a collector doesn’t have to mean breaking the bank just to feed your habit, although that mantra is often lost on hobby houses that only sell to fans with the deepest pockets. Thankfully, Multiverse Studios had the penniless gamer in mind when it came out with Bobble Budds, adorable yet affordable miniatures of our favorite gaming icons from Street Fighter to SoulCalibur.

An evolution of the classic bobblehead doll, Bobble Budds are 3.5″ tall, have several points of articulation, and sport noggins so massive that you can actually store the little guys’ torsos inside their own heads! And at roughly $10 a pop, why wouldn’t you want to snag a whole bunch in one fell swoop?

This month, a new Mega Man series featuring Mega Man, Proto Man, Guts Man, and Elec Man will be hitting online outlets, bringing the total figure count up to 38. To hype the new additions to the family and discuss the Bobble Budd line’s conception, I decided to hit up Multiverse Studio’s creative director Alan Ning and pick his brain for a spell.

“Although we originally wanted to join in on the vinyl figure movement that’s currently popular,” Alan explained, “we decided to blaze our own trail rather than follow convention. Because of this, it was decided that we wanted our product to have a very distinct, simple shape. We wanted something that a person would look at and recognize as our own.”

The first Bobble Budd in the wild was a Mega Man Legends Servbot originally sold at San Diego Comic-Con 2010 and later on the Capcom Store, where the remaining stock ran out. The Servbot was one of several concepts that Multiverse pitched to retailers, but it was Capcom that jumped on board first. “The Servbots were a hit, and we went on to produce more Bobbles for licensing and promotional work.”

It’s clear to see why that limited batch of Servbots was so popular. Bobble Budds are not purely bobbleheads but a splice between bobbles and action figures. “Rather than have a regular bobblehead that is essentially a small statue with only one point of articulation (the head), we decided to make a figure with multiple points of articulation and a neck-locking mechanism, so at a moment’s notice they can just be normal figures, albeit with large heads (we like to think of them as chibi characters).”

Those large heads are the signature mark of the Bobble Budds; ironically, that distinctive feature came about by complete accident as the team tried to find a way to store extra accessories within the Budds. “We realized that the head would need to be larger to accommodate those items, so we made new designs. Well, a relatively normal-sized head became a large head, and that became a ridiculously oversized head. When we received the initial prototypes, lo and behold, the body fit inside the head!” Coincidentally, this feature also allows you to swap the heads and bodies of any Budd you so choose.

A Servbot “LOL face” variant was later released, but that was merely the beginning. You can score a two-pack featuring Frank West and Chuck Greene from the Dead Rising series, or you can hunt down the Street Fighter X Tekken Budds, complete with miniatures of Street Fighter producer Yoshinori Ono and Tekken producer Katsuhiro Harada. Multiverse even struck a deal with THQ to not only manufacture a full set of Saints Row: The Third characters but to also have them featured in the game itself.

Though its chief focus is on videogame properties, Multiverse is trying to grow the brand, including a few original characters. Alan was rather hush-hush about future collaborations, but he did hint about licensing opportunities outside of games: “We do have connections to the film and music industry and plan to have Bobbles related to those fields.” All I’m saying is, this better lead to mini versions of Prince, Freddie Mercury, David Bowie, and other equally flamboyant rock stars!

As more elaborate characters have been introduced, they’ve started to come equipped with those previously mentioned accessories. “We’re very adamant about keeping Bobble Budds’ silhouette consistent; that is, not altering the basic shape,” Alan warns. However, that doesn’t mean we won’t be seeing bonus goodies packed in with new figures now and then. For example, ordering Asura’s Wrath through the Capcom Store gave access to a six-limbed Asura, while the ol’ Red Rocker, Proto Man, comes equipped with both a removable arm cannon and his trademark shield.

Multiverse understands that the simple design of the Budds lends itself extremely well to customization. There already exists a customizable Dragon’s Dogma Pawn, but blank do-it-yourself kits will also be made available. According to Alan, “We have already started mass-production of blank, D-I-Y Bobble Budds. They feature a matte white coating instead of the standard, smooth glossy paint on current models. This surface will easily allow for paint, marker, pen, and even pencil markings to adhere. They will also come with a large array of weapons and accessories, more than 10 for this initial series, with more planned in the future.”

The Mega Man Bobble Budd line is set to arrive later in October, though attendees at this year’s SDCC were able to get their hands on Proto Man early. He’s the coolest one of the first Mega Man wave, clearly, and Alan would agree: “He’s always been my favorite Mega Man character, and the shield and arm cannon accessories are pretty cool too.”

If you want to get your grubby mitts on these spiffy new Mega Man Budds, we’ll be holding a contest later this evening, during which you’ll also have a chance to score the entire Street Fighter set. If you want to plunk down cash for more of the little guys, you can browse Amazon, SOTA Toys, or the Capcom Store.

And thanks again to Alan Ning for kickin’ it with me!