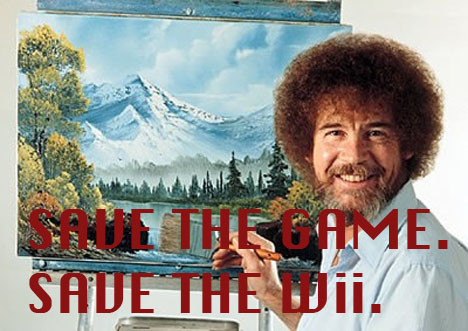 Play Nintendo brings word that the much-anticipated, and much-loved Bob Ross (the guy with the fro) Wii game has been put on the shelf. According to a message in Yahoo Groups of all places, this is what the development team said:

AGFRAG is no longer involved in the development of ANY Bob Ross Game. Please contact Bob Ross Inc. for further information.

But the drama for yo’ mama don’t end there folks, it seems it may not exactly be canceled, but rather delayed until further notice.

Joseph (AGFRAG dude), said something about Bob Ross Inc. still pursuing a video game version of the late, great Bob Ross’s Afro, just not with his group anymore. So not really “canceled”, but indefinitely on hold might be a better headline.

That’s it, no Bob Ross, then no Wii success. Nintendo’s very future hinges on this game being made. Time to pool our resources together to make it happen.