[Note: We’ve been known to do board game reviews from time to time, and although this one isn’t exactly based on E.V.O.: Search for Eden on the SNES, it’s close enough. Happy New Year! –Chris Carter]

Two things that define my tastes more than anything else are science and games. Naturally, when something shows up that combines the two, I take notice. Evolution was one such game. Though I did not back its extremely successful Kickstarter campaign, I did have an eye on it.

After my first game, I was a little disappointed with it. Gameplay felt strictly mechanical and uninteresting. A funny thing happened after that game when I sat down to collect my thoughts for review: though I knew I didn’t have much fun with my first game, I could only think of good things to say about it. There must be something here that we missed. We played again a few days later.

After that game finished, we immediately played another. It takes some time to click, but when it does Evolution reveals itself as not just a great set of mechanics to match its theme, but also a fun, if uneven, way to spend time with a few friends. 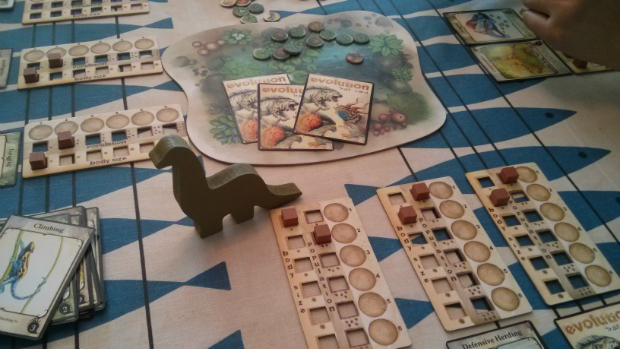 Evolution takes place around a watering hole that acts as the focal point of a small ecosystem full of early animals. In the beginning, all of the animals are functionally similar, but as time passes they gain new traits to differentiate from one another. Each hopes to have an advantage over its peers in gathering food, increasing population, and surviving.

The watering hole has a variable supply of food. As the number and population of species grow, the watering hole may not have enough to feed everything. At that point, species can benefit from techniques to gather more food at one time, gather food from other sources, or even turn to predation, feeding off the other species in the area.

When the environment requires it, species adapt. If they don’t or can’t, they die out. New species take their places and the circle of life continues. As a theme, it is a nice reprieve from the usual dragons and/or spaceships, but the most impressive characteristic is how well the mechanics support the theme.

On the spectrum of board game complexity, Evolution is fairly simple. Players draw cards at the beginning of a round, play one card each into the watering hole to determine food level, then play as many remaining cards as desired to introduce new species, increase the body size and/or population of existing species, or add traits to existing species. When feeding time comes around, players take turns feeding their species until each species has eaten its share or has no more food available. Populations decrease for those species who did not eat enough, and go extinct if population drops to zero.

Trait cards are the most interesting gameplay elements. Pack Hunting can allow a smaller predator to take down larger prey. Climbing can protect a species from being attacked by a carnivore without the same ability. Foraging can be used to gather plant food quickly in times of famine. These are only a few of the 17 traits included.

Through those simple mechanics, a narrative can be built. The striking part of Evolution is that the narrative can be fairly different from game to game, but each is grounded in the principles of evolutionary biology. In one game, we had a plentiful watering hole early on, leading to herbivores with high populations. Later on a scarcity at the watering hole caused mass extinctions, with only the most efficient gatherers surviving. 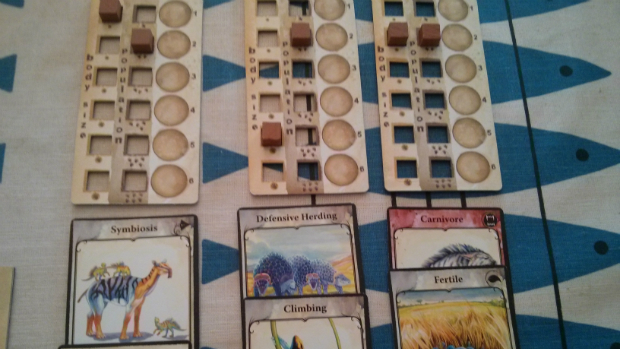 In another game, an apex predator showed up: large body size, large population, and the Fat Tissue trait. It devoured almost every other species in one round. The next wave of species had Climbing, which protected them from the carnivore until a few turns later when it phased out one of its traits and gained Climbing as well. A story like this illustrates how closely the mechanics follow actual evolution: card draws allow for random mutations, and those species with the best mutations live on while others die off. After prey adapts to protect from a predator, the predator must adapt in order to continue to prey.

Every trait has a counter. Some traits are useless except to counter others. A predator with Ambush is no better than one without if there are no species with Warning Call. A species with Hard Shell has wasted a trait if there are no carnivores near the watering hole. Phasing out unnecessary traits also reflects real world evolution.

Though the stories told in Evolution are generally cool, the mechanics can lead to an uneven experience. As fitting as random mutations are to the theme, sometimes the card draw prevents players from enacting a winning strategy. In a recent game, one player had an awesome ecosystem built: three high population species that were not attackable without one specific trait (Intelligence), but once it was clear that a carnivore with Intelligence was necessary to break the food-gathering machine, Intelligence never showed up in my hand. We knew we had to adapt in order to compete, but we could not make do with what we were given. The winner was clear several turns before the official end. 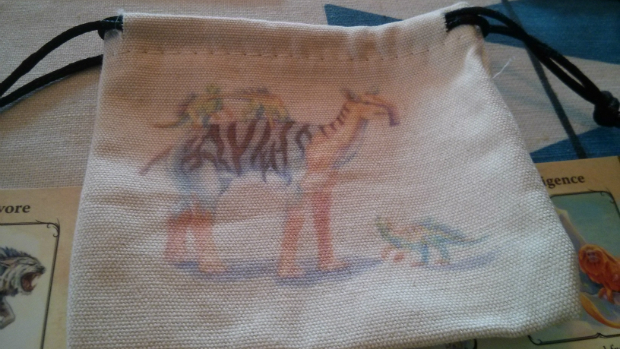 From a components standpoint, Evolution is fantastic. Having achieved a good number of stretch goals in its crowdfunding campaign, it was able to have a lot of high quality wood, cardboard, and cloth, including an unnecessarily large wooden brachiosaurus as the first player token. The artwork is imaginative and colorful. Beyond the mechanics of collecting food, it is entertaining to picture what each creature looks like with its unique combination of traits, and the art helps to stoke the imagination in that regard.

Overall, I have a higher opinion of Evolution than I did after the first play session. It is light enough to play with non-enthusiasts, but it still requires a good bit of logic in order to suss out the winning combinations and to adapt to what opponents are doing.

Evolution‘s greatest strength is how the theme and mechanics support one another so well. While this can sometimes lead to a dull experience or a runaway winner, it more often leads to a tight competition where each player is trying to preempt or counter the others. Though it is not marketed as an educational game, I could imagine using it as an abstraction to introduce basic principles of natural selection. It is survival of the fittest in a board game, and it embodies that topic impressively.