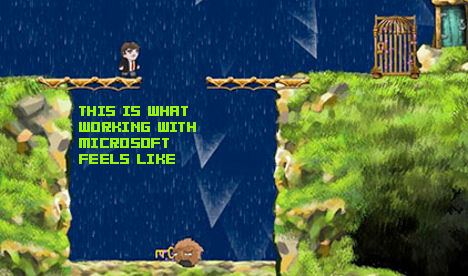 Jonathan Blow, the twisted mastermind behind critical darling Braid, has criticized Microsoft’s certification requirements, suggesting that the overall quality of an Xbox Live Arcade game can be hurt if too much time is wasted making the platform holder happy.

“They removed some of the requirements for XBLA games, but there are still a lot of requirements, and I believe that, at least for a single-player game like my game, the vast majority of these requirements are unnecessary,” Blow explained. “I put in a tremendous amount of work meeting all these requirements, when I could have put that work into the actual game, and made it even a little more polished, little bit better.”

Blow stated that the certification process certainly wasn’t bad enough to stop him releasing the game on Xbox Live (obviously), but that the requirements are geared toward triple-A titles, which isn’t useful for everybody. On a differing subject, he also stated that money wasn’t his goal, and he actually doesn’t care how well Braid sells. He also stated he has no sequel planned, nor is he “waiting in the wings with a level pack, or DLC or anything.”

Microsoft’s problem, as it always has been, is that it’s far too controlling. If it wants XBLA to have a library of fun, creative games, then it needs to stop applying chokeholds to everything that passes through its hands. Maybe XNA will be a fertile soil for budding developers, but I don’t know if The ‘Soft will ever lose its megalomaniacal tendencies long enough for indie developers to want to stick around.