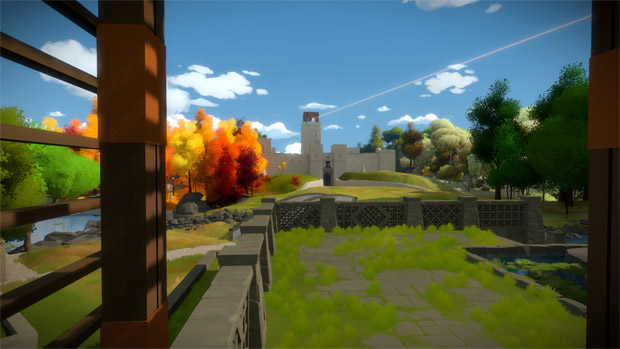 Designer Jonathan Blow talking about The Witness was not something I expected to see during the PlayStation 4 reveal event this week; it was one of the more pleasant surprises of the evening. While the exploration-puzzle game will be a timed exclusive for the system as far as “competing console platforms” are concerned, according to Blow, we could also see The Witness available on iOS or PC at launch.

“People have been speculating that we got paid for PS4 exclusivity, but that is not the case. There was no money involved,” he wrote. “The real situation is that, because we are a small developer, we only have the ability to launch on a small number of platforms at once. We liked the idea of being on a console, and originally we thought we might be on the PS3 or Xbox 360, but eventually we decided not to target either of those, due to the relatively low system specs and the work required to do the ports.”

In deciding on a platform for this “high-spec version of the game,” Blow explained that “There were people at Sony who really liked the game and were keeping in touch with us about it, and so we naturally started going to their PS4 developer events, got a dev kit, and started playing with it. I don’t have good communication with anyone at Microsoft right now, but all our technical people like the PS4 specs a lot more than the leaked Durango specs, and we like the positioning of the PS4 (it’s about games) more than what we perceive Microsoft’s positioning is going to be.

“So we just found ourselves doing a PS4 port. And once we are doing that, it is not practical for us also to think about another console port.” As it turns out, the deal itself “was just a formalization of something that was already going to be the case” and needed to be signed so The Witness could appear in the PS4 showcase. It’s refreshing to hear such an in-depth explanation, isn’t it?