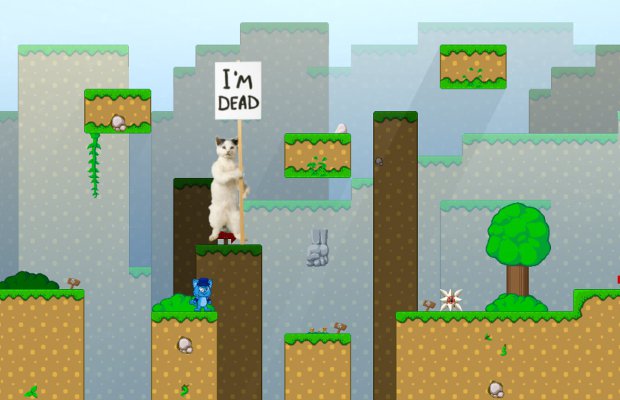 There’s been a rise in the 2D trial-and-error genre thanks to the likes of Super Meat Boy and VVVVVV. Independent developer 2Play Studios have released their offering, Bloody Trapland, which heaps on some 4-player co-op along with buckets of blood from poor, defenseless pussies doing their very kitteny best to avoid lasers, saw blades, spike traps, and getting, um… fisted. Poor kitties.

While the game itself is $15, there is a demo available. Small problem: you’ll have to download a third-party client to launch the demo, Desura. You’ll also have to create an account for this software. Hoop jumping isn’t exactly a favorite past-time of mine and, while I did download the software and create an account because I love you all dearly, downloading and running the demo proved to be a bit more of a hassle. Apparently my computer won’t run the game despite the fact that other XNA games run just swimmingly. It saddens me because I sincerely do want to try it. Take a peek at the title’s two trailers and, if you decide to give the demo a chance, let me know what you think.