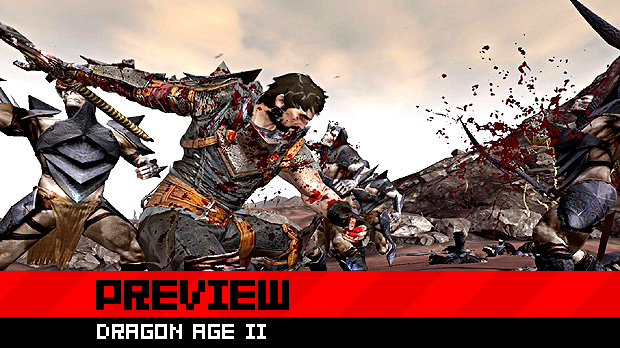 “Dragon Age II is not a brand new game; It’s a better, more-refined version of Dragon Age: Origins,” explained executive producer Mark Darrah during a recent press event at BioWare’s Edmonton studio. Darrah’s take on Dragon Age II should be heartening for anxious fans of the first, yet his take — thus-far consistent with the larger marketing push — seems to have fallen on deaf ears.

Since it was announced Dragon Age II has come under fire from ostensible fans for its changes to combat, player agency, dialogue, and continuity. “It’s extrapolation to the worst possible extreme,” a bemused Mike Laidlaw, lead designer, explained to me in a later interview.

For my money, insofar as my time with Dragon Age II, Darrah’s assessment is apt. Four hours isn’t long enough to make a judgment call on what will probably be a sprawling narrative, but the basic mechanics are as sound as, if not better than, their predecessors.

Dragon Age II begins with an interrogation: Varric — dwarven crossbowman, entrepeneur, ne’er-do-well — is being rough handled by Cassandra, a seeker looking for information on the Champion of Kirkwall. This Champion is Hawke, an attractive female rogue with red hair and emerald eyes, and Varric supposedly knows where she is. The dwarf begins his testimony:

Hawke and her family are fleeing the destruction of Lothering but find themselves cornered by darkspawn. They cut down the darkspawn lines easily, stopping only to make grandiloquent speeches to reaffirm their determination. Hawke and her sister slaughter wave after wave of darkspawn and easily butcher an ogre before unleashing a dragon to destroy the rest of the hor– 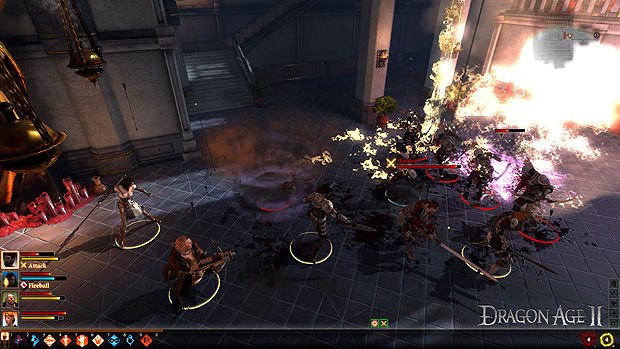 In Varric’s version of events Hawke is decked out in impressive armor, carrying what look like a pair of bat’leth. She and her sister face three distinct waves of darkspawn, and their respective skills get more impressive after each wave. Neither Hawke nor her brother, Bethany, can die during the introduction, and there are plenty of enemies to go around — the result is a safe arena for new players to explore different skills and familiarize themselves with the basics of tactical pausing, camera operation, and hot-keyed abilities.

You’ll notice, perhaps, that the fundamentals of combat in Dragon Age II haven’t changed much vis-a-vis their Origins counterparts. Mark Darrah’s go-to comment on the combat has been that, “When you push a button, something awesome happens.” But Darrah needs clarification: the presentation layer has changed, but the mechanics haven’t. Dragon Age II is still a stat-driven, Dungeons and Dragons-based game — replete with inventory screens, if-then tactical Rube Goldberg machines, and little numbers coming out of heads.

Standard melee attacks trigger a little bit faster — thanks in large part to smoother animations — and while it looks like a kind of combo, there’s nothing mathematically different than four straight melee attacks from Origins. However, the combat has changed somewhat: BioWare has added a layer of spatial awareness to each character’s skillset, which the team call “closing attacks.”

The combat was fun, but, it wasn’t responsive. Especially, I think what was bothersome was how slow it was, in terms of you doing something and finally executing it. For instance, the Shield Bash. When you SB somebody, you knock them down, and if you then try to attack them while they were down, by the time it sort of lined up the animation and you shuffled into place and finally swang your weapon …

Q: They were back up?

A: They were back up.

Dual-wielding rogues and warriors will find these types of movement-based skills especially useful, allowing them to close down gaps between enemies and allies. Another similarly useful addition  is that characters can now turn and attack in the same animation. The result in a more kinetic and spatial experience built on top of Dragon Age‘s RPG foundations. Complimented by the colorful new art direction, Dragon Age II‘s combat offers the visual rewards of an action game but without being mindless or mealy-mouthed.

That’s not to say that some other writers at the event didn’t try to Dynasty Warriors their way through the first few hours of the game, but they saw the game over screen a lot more often than I did. 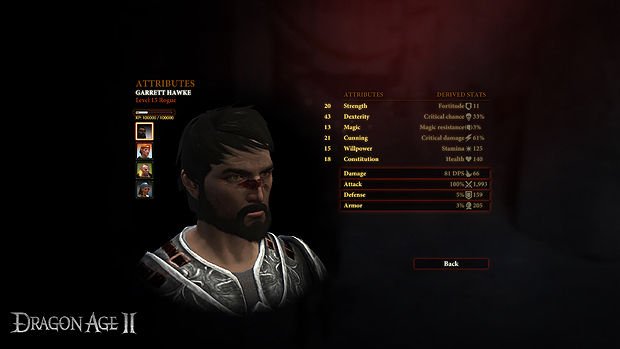 If you look at Dragon Age II‘s combat and still can’t contain your apoplexy, take a deep breath and open your character menus. Marvel at how clean and intuitive they are, spend a minute experimenting with your equipment, and watch as the game automatically derives your damage-per-second. With the power of math behind you, I’m sure you’ll find the strength to admit that there isn’t much hack-and-slashing going on.

Perhaps the truly hardcore like doing their own calculations, but Dragon Age II is full of small design changes that make the user-experience a lot smoother and clearer, including (perhaps most importantly) an overhauled skill tree.

Several familiar abilities make the cut from Origins, but the new focus on spatial relationships calls for new skills to take advantage of them. The new skills — in conjunction with melee options for ranged attackers — make, say, a rogue archer build useful for the first time. There are also warrior skills that, for example, get stronger when your tank is surrounded by enemies. It’s obvious that BioWare took time looking at different builds and playing to their strengths.

I also particularly like the new skill trees because they’re so much more flexible than the Origins tables. Very few of the skills have prerequisites, and you can choose to spend points improving your useful skills — make them faster, or cost less — instead of wasting them on skills that don’t fit into your build or play style.

The last major improvement in user experience includes crafting — instead of collecting individual ingredients, Hawke has access to resource deposits that any craftsman in Kirkwall can use. Natural resources — elfroot patches, lyrium veins — can be found in the caves and hills surrounding Kirkwall, which gives players an extra incentive to explore and complete quests that they might’ve otherwise ignored. 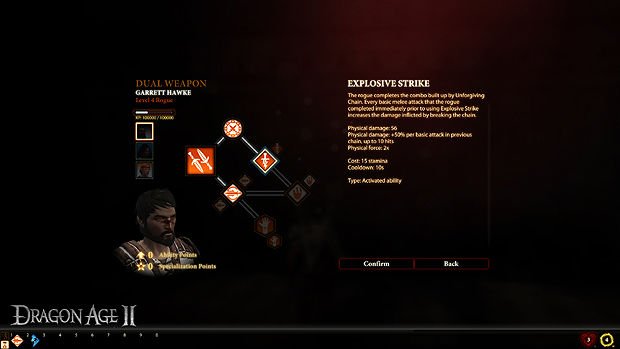 What I particularly like about Varric’s introduction of the game is the neat way that it locks his perception into the gameplay — Varric already knows that Hawke is the Champion, and it makes sense that he would present her as a devastating warrior. It’s convenient that being a devastating warrior is a nice, safe way to introduce complex ideas to new players without scaring them off. “We give the player a chance to just bust out for a minute,” Laidlaw told me. “Here you go; here’s two minutes, go nuts. Cone of Cold, Fireball, rain fire down on your foes. That’s cool, that’s the mage experience in terms of combat.”

But the frame narrative — the hoity-toity name for “a story within a story” — does more than set up a tutorial. It sets up a certain amount of narrative distance and flexibility that isn’t possible in what writer David Gaider calls “walk and talk” RPGs: “You’re in every step that the player takes, talking to every person that the player talks to.” Gaider continues, “And, I mean, that’s cool. A lot of RPGs do that. But … it also limits the types of stories you can tell.”

Gaider described a more novelistic approach to Dragon Age II, with Varric serving as unreliable narrator, playing fast and loose with chronology. Varric glosses over Hawke’s first year in Kirkwall, for example — it’s simply not important to him. These moments create a certain amount of distance between the player and Hawke as player-character: Hawke greets players as old friends even though the player has never seen them; supporting characters develop their own nuanced relationships with Hawke that the player is left to parse.

The result is two fold: relationships feel organic and natural because they aren’t saddled by long, overblown exposition; and Kirkwall feels immediately more reactive to Hawke’s presence. Instead of a text box or an epilogue detailing the consequences of your choices, the extended timeframe gives Hawke enough time to see them first-hand. When one of your followers loses a loved one, you see it in her body language and her dialogue with Hawke, not forty hours later. Dragon Age II manifests the “show, do not tell” adage of storytelling.

I mentioned earlier that I only played about four hours of Dragon Age II — I only experienced one timequake — but a bit of hard thinking leads me to believe that the benefits of the frame narrative are bountiful indeed. Keeping the narrative locally focused but chronologically expansive allows BioWare to limit the number of active quests. Gone are the doldrums of constantly shuffling between Denerim and Orzammar for this or that fetch quest — BioWare promises a focused narrative with an equally focused gameplay arc. 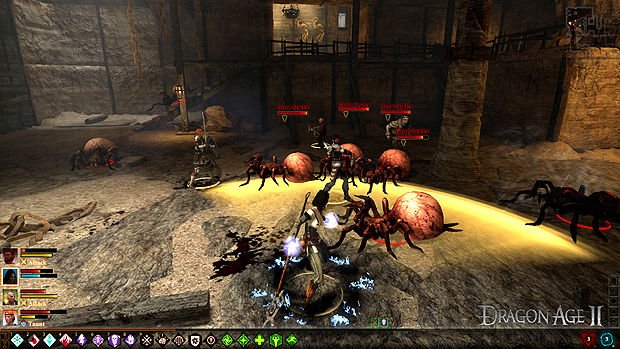 Dragon Age II is refined, polished, and clean, the result of a unified vision focused on reaping the intangible benefits of tactical planning and deep thinking — it simply feels good to see your team cinematically executing your vision. The same compulsion I felt to buy Awakenings is at work in Dragon Age II: namely, I get a deistic kick out of tinkering, experimenting, and setting my creation loose. And the Dragon Age franchise — with its labyrinthine systems and mechanics — simply enables me to do so better than any game in the past several years.