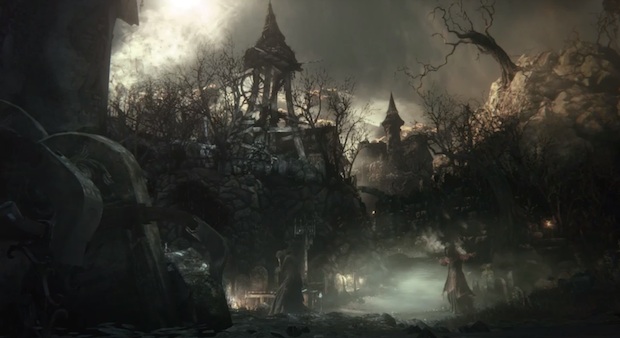 They saw what you were doing

In a gamescom behind-closed-doors showing, we got a good explanation of what is going on in Bloodborne‘s HUD. That top red bar is a health gauge, and the green one underneath it is a stamina gauge. Nothing new there except for the yellow bits you might see in the bar during play, coming from the new Regain System.

As with the Souls series games, you have two slots to put your items in. In Bloodborne, they’re set for your weapon and firearm. But now there’s a healing items icon off to the right, next to the bars — a dedicated spot.

With the previous Souls games you had slots you could use to put any item in. But most would put health items in there to deal with the franchise’s incredible difficulty. Now they’re separated, which is why you’ll see the health vial with a number on it within the HUD.

But you can still use those item slots as needed. In an example, an urn full of oil could be switched to a Molotov Cocktail. We saw an enemy bombed with the oil before the cocktail, upping the damage done in that case. More variations to explore among item load outs were promised.

That image from the newly released trailer you see above is from a new area of Bloodborne called Hemwick’s Grave Town. It’s gorgeous and highly atmospheric. It’s also filled with freaky wailing old ladies that gang up on you and beat the sh*t out of you.