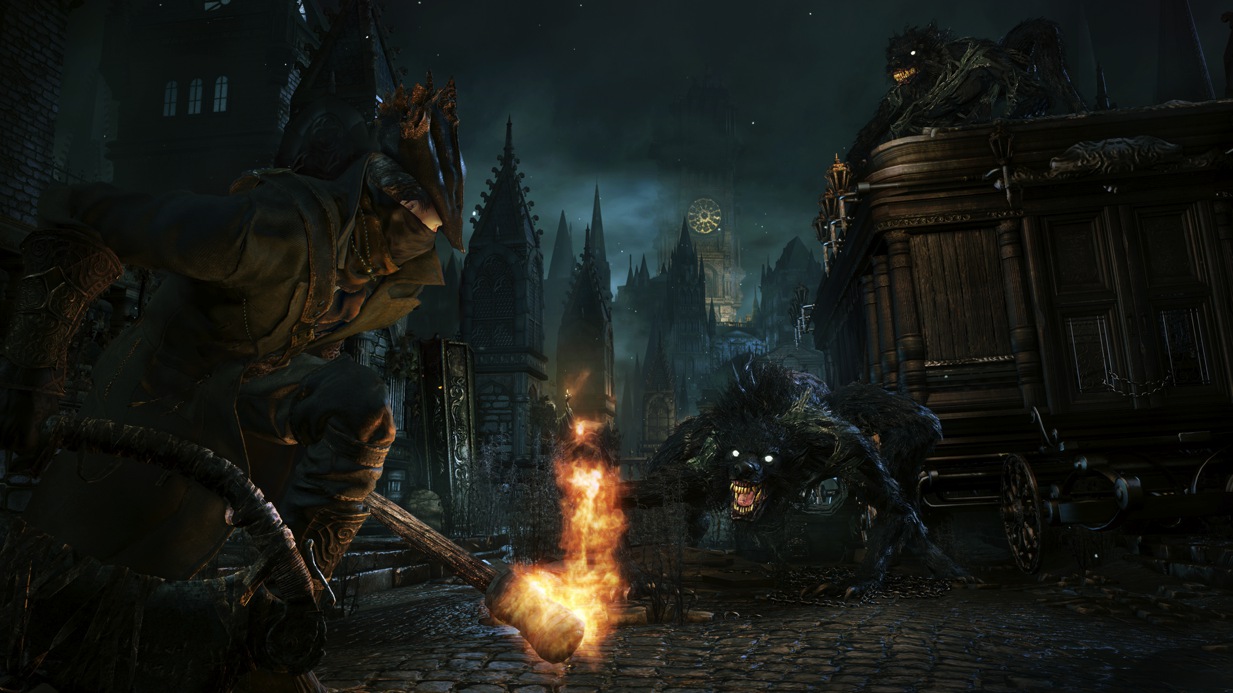 Bloodborne began all the way back in 2012, long before the PS4 was done. Sony approached From Software, asking them to create a title for their new platform. Hidetaka Miyazaki, the director of Dark Souls, began work right away.

Now Japan Studio and From Software are finally showing off what was one of the biggest surprises of E3 2014. We enjoyed a behind-closed-doors showing of what’s sure to be one of the hardest and freakiest exclusive games for the platform. 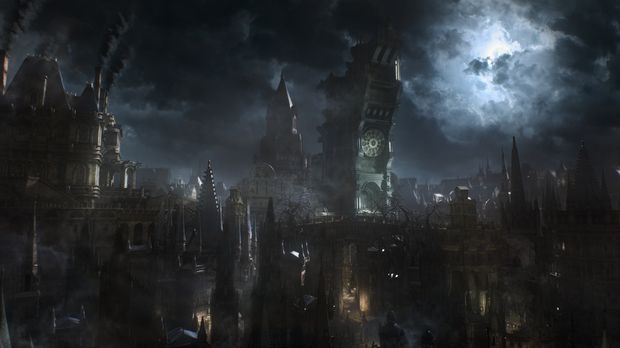 Welcome to the 19th century Victorian town called Yharnam. The place is cursed, known for a plague that has transformed the townspeople into terrible zombie-like beasts, so you’d normally not want to stay for too long. The place is uniquely gorgeous in a creepy, nightmarish sort of way, but with the ongoing creature hunt, it’s probably not safe to look around for too long.

But you play as one that will hunt these infected beings with two different weapons — a shotgun and something called a saw cleaver. It’s still far from safe, but from what I’ve seen of Bloodborne so far, you’re quite capable. 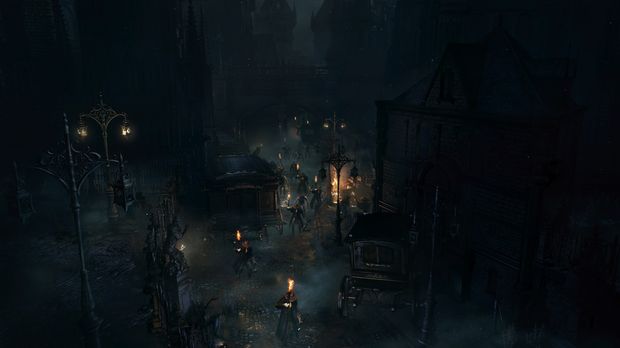 This is an action-RPG not unlike Dark Souls, but it has much more of an action feel than its nearest cousins. The hacking and slashing isn’t as fast as, say, Devil May Cry, but it’s certainly faster than any of the Souls series games. Miyazaki explained that they wanted to move on from passive engagement to a more active, aggressive play. He warns that players that would normally hang back would have a hard time in Bloodborne.

But don’t take this and assume that Bloodborne will be too easy. In fact, Miyazaki made it clear that we would have died many times in our demo if it weren’t configured for ease of demonstration. After awhile, he started pointing out where we should have died, and that happened quite often! Even the staffer working the demonstration was getting his ass kicked. Miyazaki said that their goal was to have each battle so challenging that players would fear for their life. From Software wants every player to feel the terror in every encounter, so much so that they’re thanking God that the battle is over. 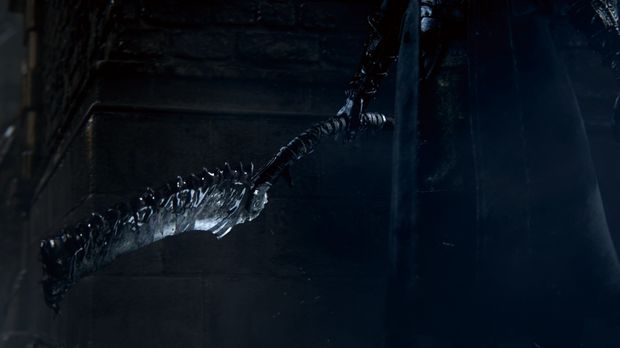 Battles have you slashing with your mean-looking saw cleaver, which is specialized for beast hunting. While it wasn’t clear exactly how it worked in our demonstration, Miyazaki explained that it can be used tactically with its three different cut positions. Its blade can be used closed, halfway extended, or fully extended, depending on the encounter type.

Even in its alpha state, Bloodborne‘s dark, gothic visuals were very easy to appreciate. This is one very good-looking game. Heavy fog, particle effects, creepy moonlit streets, and shifty shadows made Yharnam look like a place that would be outstanding to explore. Fully armed, of course. It’s like the darkest, grossest version of a Victorian-era nightmare town. They couldn’t have made it look more creepy.

And the enemies! Yikes. These were some of the grossest, freakiest creations I’ve seen since the early Silent Hill titles. Seeing the lumbering infected townspeople with their slightly too-long limbs come shuffling around the corner gave me the creeps. Massive dogs and greasy, squirming giant crows were even worse to look at in motion. They really made me uncomfortable. And the sub-bosses and final boss were things of grotesque beauty. If nothing else, I want to play through all of Bloodborne just to see how messed up these enemies can get. 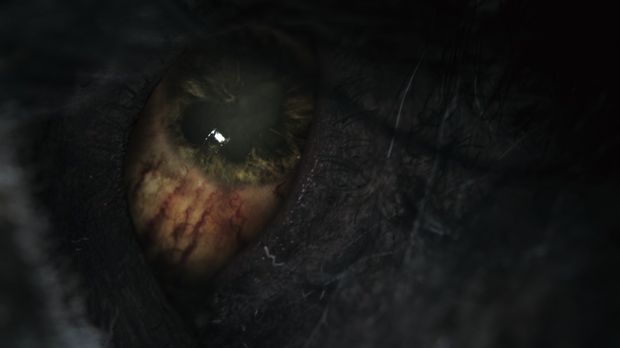 Bloodborne is heavy on both the scares and blood splattering. Again, even standing still, the enemies are frightening. But when they’re moving — or worse, suddenly jumping from alleyways — they’re enough to have you slashing frantically in defense.  They’ve made some already scary creatures move in even scarier ways. For the blood, while the splatters look great, sometimes the sprays seem a bit excessive. By the end of the demo the main character was completely coated in crimson drippings.

Yharnam looks to be an explorer’s dream with its many hidden passageways and shortcuts. It’s a huge city that has many levels to work your way up and over. You’ll want to make good use of these hiding places and escapes when the town’s bell tolls, informing killing groups that the hunt is on. 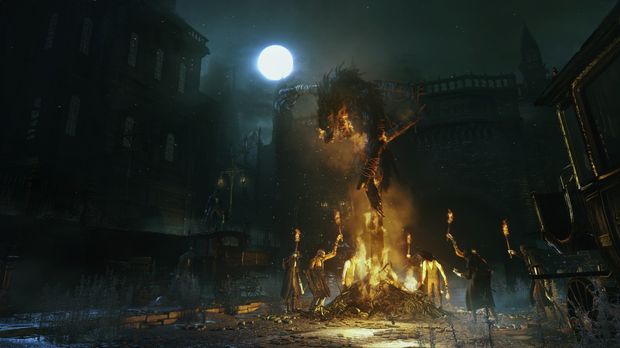 The end of the demo had our guy going up against a massive, incredibly detailed wolf-like beast that towered over the player. His huge arms sent ground-pounding punches toward the player, and his dashes and swipes came so quickly that it looked absolutely impossible to return hits. Miyazaki said that they worked to make it so it seems like you’re not supposed to beat this boss — they wanted to make it look impossible to kill. Nice work on that, team.

Even with the shift away from defense and more toward action and attacks, Souls series fans are going to enjoy Bloodborne. The challenge they crave is certainly still there, as is the dark atmosphere and the sense of exploration. Even from the short bit we saw it’s clear that this is one messed up game.

From Software and Sony are still keeping plenty of details on Bloodborne to themselves for now. Still, this is an excellent first showing for the upcoming exclusive. Let’s hope we see more very soon.