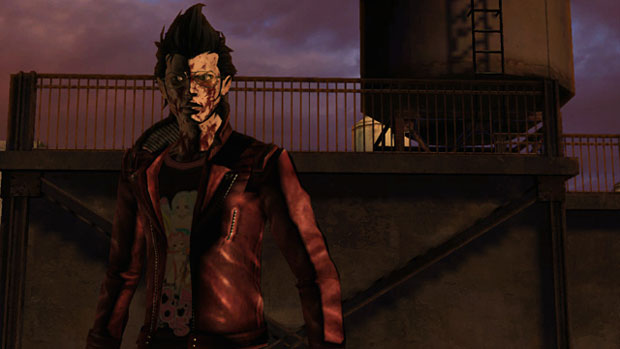 No More Heroes 2: Desperate Struggle is just a little more than a month away from launch, and it seems that Ubisoft is going to do their best to keep the game on our minds. They just launched an official website for the game, and it’s a pretty fun place to be. It’s got a style that reminds me of playing a broken NES game, except with a lot more swearing.

As for new info, there isn’t much there yet. So far, the “characters” section of the site only features Travis, Sylvia, Shinobu, and Henry, but there seem to be quite a few blank spots in between. There are a few new screenshots though, one of which features the first appearance of Vlad, a ghostly astronaut (or is it cosmonaut?) who may or may not be one of the games proposed 51 bosses. Vlad gets some artwork too,  as does the baby-faced muscle man thing that Travis fights for a few seconds in a previous trailer.

As for other stuff, the site also has a bunch of semi-old trailers, a community message board, and a brief “about” section that lets us know the game has “Giant robots! Coconuts! Chicks with short skirts and bad attitudes! F*ck yeah.“

Only 34 days to go until I own this game. Where’s Jeff Goldblum with my Wait Mate when I need him?

Check out the new screenshots, art and character descriptions in our gallery section.