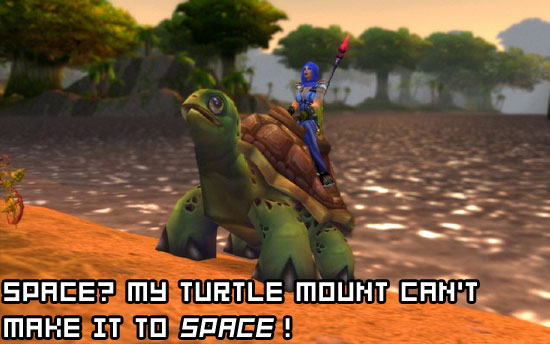 Given the outlandish success of Blizzard’s World of Warcraft, there was no doubt that they’d (at some point) create another MMO title. While Blizzard could theoretically release expansion packs for the next 20 years and likely make enough money to buy the Earth, the company’s internal gears have been spinning.

“As far was working on another MMO project or a WoW 2, obviously as a company we’d be very interested in further exploring the MMO space”, World of Warcraft lead designer Jeffrey Kaplan revealed to CVG.

What?!? Did he say “space”? As in like, a World of Starcraft MMORPG confirmed? Ah, I kid, I kid. While this isn’t an official announcement of anything at all, it’s nice to know that somewhere down the line, World of Warcraft players will likely be given a reason to put down the pipe and possibly pick up a new addiction.

What Blizzard franchise would you like to see invade the MMORPG space? I’d like to see  a Blackthorne MMO, or a Lost Vikings title. Or perhaps — and this is a wild idea — a brand new IP? Nah. That’s crazy talk.